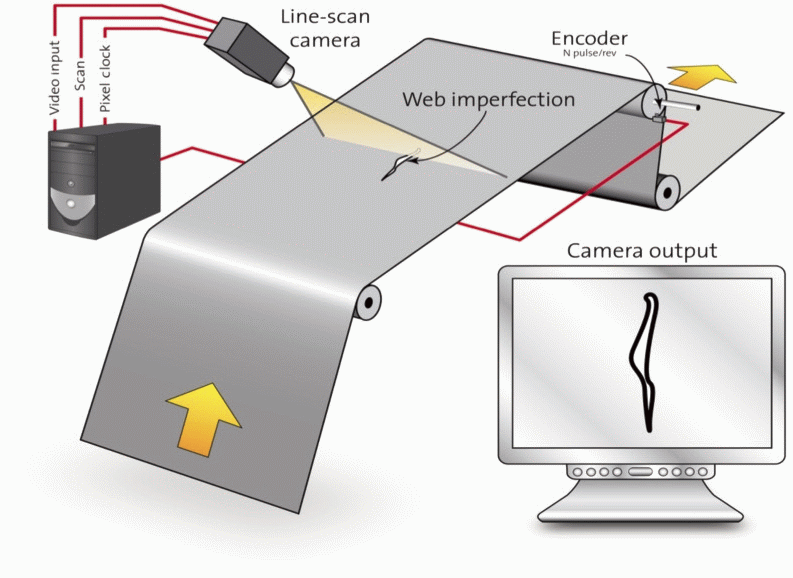 Contact Image Sensors (CIS) are imaging devices that have been around for many years. Used extensively in copiers and scanners as well as currency verifiers and card and ticket reading systems, CIS form an image line by line, so there is a natural comparison with linescan cameras. Industrial web inspection applications traditionally use linescan cameras (Figure 1 Right), so the question has often been asked as to whether CIS are a viable alternative.

Up until recently, the classic limitations of CIS such as very close working distances and low depth of field, lack of speed and the absence of an industrial interface standard have meant that their use in industrial applications has been very restricted. However, the recent introduction of the new KD series of contact image sensors for machine vision applications by Mitsubishi Electric Europe has addressed these issues.

The sensor uses a rod lens, which produces an image the same size as the object without the distortion commonly found when using conventional lens/sensor (camera) systems. This means that there is no magnification effect when using the CIS.

The use of the integrated tri-linear sensors with filter-on-chip and white LED illumination is unusual in industrial CIS products but is proven in existing line scan cameras. On board preprocessing delivers RGB images complete with flat field correction to compensate for any sensor non-uniformity. A maximum line rate of 23kHz allows scan rates of 960mm/s equivalent to 44µs/line. Crucially for machine vision applications, these new CIS have a working distance of 12 ± 0.05mm from the front face and a machine vision standard CameraLink output.

This working distance is a significant improvement over the ‘contact or close to contact’ requirement of traditional CIS removing some of the integration challenges in industrial web applications.

The configurable CameraLink output allows data to be supplied in both 8- or 10-bit formats. In addition, there are two physical formats available. For OEMS, the CIS can be supplied in an open frame, with 5V & 24V power required. Alternatively they can be supplied in an IP-rated enclosure, requiring only a 24V power supply. The low headroom of CIS assemblies means that they take up less space than linescan cameras. 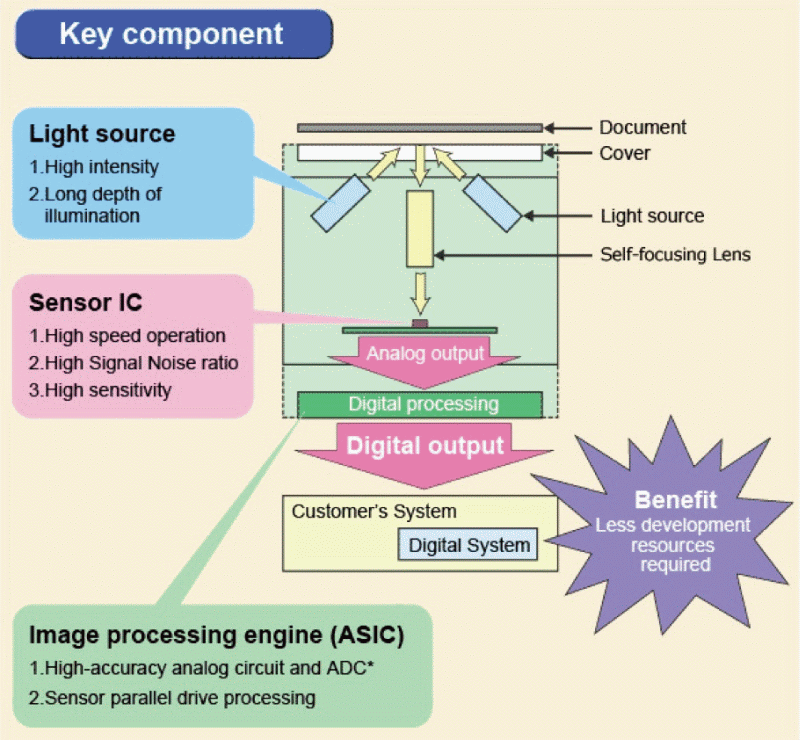 Linescan imaging is a well-established part of the machine vision scene. There is a wide choice of linescan cameras with line resolutions up to 16k pixels, a choice of three different colour imaging techniques and a wide variety of line rates. Linescan cameras operate in the conventional machine vision sense, requiring an appropriate lens and an external light source. This offers a good deal of flexibility, since the magnification and area of inspection can easily be changed by adjusting the working distance or even the lens.

In addition, a much wider range of incident illumination is available for linescan cameras, together with a choice of illumination and viewing angles, allowing inspection for different types of surface anomalies.

While it is clear that linescan cameras are still the performance leader and provide more flexibility, this new breed of CIS offer a performance level that make them viable for a number of applications, including the inspection of printed circuit boards, printed matter or LCD panels. However, as is the case for many machine vision applications, getting expert advice is critical in choosing the optimum solution.

Stemmer Imaging is one of the UK and Europe’s largest independent suppliers of vision technology and services to industrial and scientific OEMs, system integrators and reseller markets. Recently chosen by Mitsubishi Electric Europe as strategic partner for the distribution of the new contact image sensors throughout Europe, Stemmer Imaging also offers linescan cameras from leading manufacturers and so can provide clear, independent advice as to what is the best solution for any particular web inspection application.