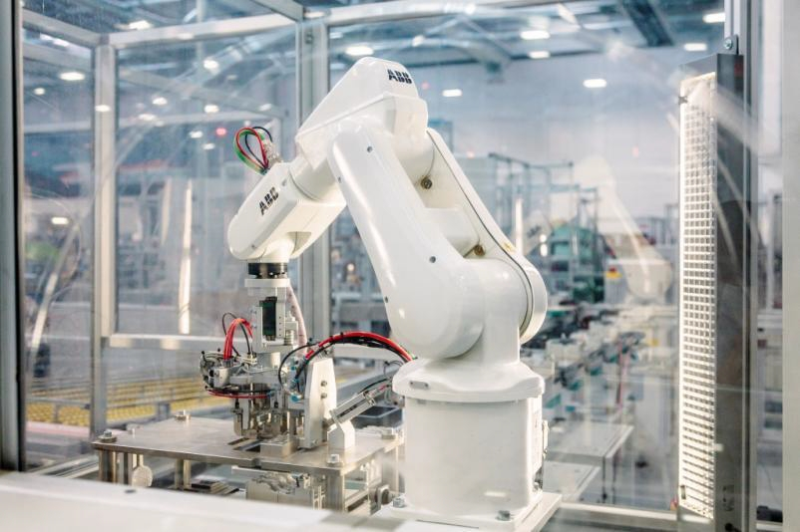 ABB (stand E130) will be showcasing a complete integrated automation demonstration featuring a range of products from its robotics, machinery controls and automation portfolios at the PPMA Total Show 2016, NEC Birmingham, 27th to 29th September.

Simulating a typical production application, the cell enables visitors to see the key control features, communication methods and safety collaboration possibilities that can be realised with ABB’s latest technologies. The robot will pick products from a mini-servo controlled conveyor, with the whole system being controlled by the PLC. If an unsafe event occurs, the safety controller will switch the drives and robot off to a safe halt operation.

All of the equipment in the cell is programmed using ABB’s new Automation Builder software platform, which is demonstrated on the stand. An integrated programming, maintenance and simulation tool, Automation Builder helps machine builders and systems integrators significantly reduce the time and cost associated with commissioning, operating and maintaining automated systems. Alongside the cell is a touchscreen kiosk giving visitors the opportunity to try out ABB’s Zenon supervisory control and data acquisition (SCADA) system. The Zenon system incorporates a number of features for food and beverage and pharmaceutical production applications, including security protection, audit trail, batch and production scheduling capabilities. With over 300 supported communication protocols, plus easily configurable interfaces for connection with business planning and cloud-based systems, Zenon can be readily integrated with anything from single machines through to multi-site networks. As part of ABB’s Internet of Things, Services and People (IoTSP) business model, Zenon can be fully integrated with Automation Builder to help minimise start-up time and maximise productivity.

Another product making its debut on the stand is the IRB 910SC, the first of ABB’s family of selective compliance articulated robot arms (SCARA). Designed for a variety of general-purpose applications, the SCARA robot incorporates high performance, superior path control and precision in a small footprint. It is ideal for processes requiring fast, repeatable and articulate point-to-point movements such as small parts assembly, machine tending and pick and place.

Other major attractions at the stand include the FlexPicker cell and ABB’s collaborative robot YuMi®. Comprised of two FlexPicker IRB 360s with integrated colour vision technology, the FlexPicker cell is capable of performing 120 picks per minute. Winner of the ‘Invention and Entrepreneurship in Robotics and Automation’ (IERA) award at the Automatica trade show in Munich earlier this year, ABB’s YuMi® incorporates extensive safety features that enable it to work safely alongside human workers.

ABB will also showcase their installation product ranges which feature high quality cable protection solutions such as the new Adaptaflex anti-microbial metallic and PMA nylon options. The PMA conduit has a bacteria-resistant design and can be used to house cable looms, minimising both the risk of fouling and the time and cost associated with cleaning exposed cabling. Ty-Rap® detectable cable ties which allow detection by X-Ray, metal detectors and visual inspection will also feature on the stand.

ABB’s presence at the PPMA Total Show 2016 is part of its ongoing campaign to highlight the capabilities of modern automation technology for UK manufacturing applications. By reducing operating costs, improving end-product quality and consistency and cutting energy consumption, ABB’s automation technologies can play a major role in helping UK manufacturers to unlock new levels of competitiveness and productivity.

ABB (www.abb.com) is a leading global technology company in power and automation that enables utility, industry, and transport & infrastructure customers to improve their performance while lowering environmental impact. The ABB Group of companies operates in roughly 100 countries and employs about 135,000 people.