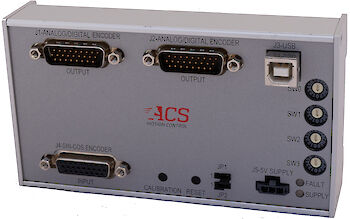 ACS Motion Control has launched a new High Precision SinCos Encoder Multiplier and Splitter for OEM machine designers. The EM1024 is a single-channel analog SinCos encoder multiplier and splitter designed for high precision motion control applications such as inspection and metrology systems. Two pairs of output encoder signals (four in total) are generated from the original incoming SinCos encoder signal; two buffered SinCos identical to the original, and two AqB with up to 1024 counts per SinCos period. The EM1024 enables higher accuracy and higher resolution triggering of devices in demanding motion control applications, such as wafer and flat panel inspection, and metrology, digital printing, and biomedical systems.

Key features of the EM1024 include:

Jason Goerges, ACS Motion Control USA General Manager and Global Vice President of Marketing, commented: “We are pleased to add this compact yet powerful product to our offerings. The EM1024 offers higher precision and enhanced capabilities over its predecessor, and is available for immediate shipment.”

ACS Motion Control delivers high-performance motion controller and drive solutions to OEM machine builders in semiconductor, laser processing, flat panel display, 3D printing, electronic assembly, and life science industries. Founded in 1985 and headquartered in Israel, ACS technical sales and support offices in the USA, Germany, China, and a global partner network are backed by an ISO9001-certified design and manufacturing facility. ACS is a member of the PI Group since 2017.

Physik Instrumente (PI) is a leading global player in the precision positioning technology market, and is well known for the high quality of its products. The company has been developing and manufacturing standard and custom products with piezo or motor drives for over 40 years. By acquiring a majority stake in ACS Motion Control – a leading developer and manufacturer of modular motion controllers for multi-axis and high-precision drive systems – PI can now provide complete systems for industrial applications demanding exceptional precision across a broad dynamic range. The PI Group has four sites in Germany, and is represented internationally by fifteen sales and service subsidiaries.

LDRA partners with Siemens to boost traceability and verification