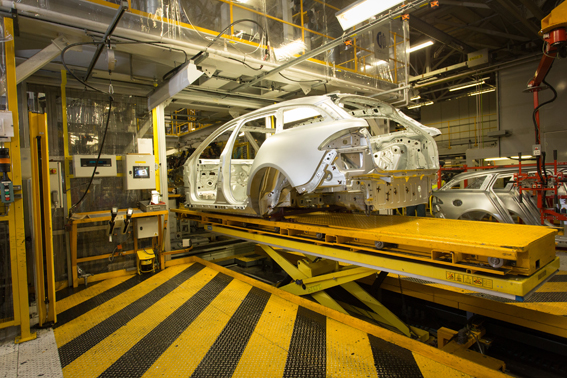 The Jaguar XF Sportbrake is produced at the famous Castle Bromwich plant where Spitfires and Lancaster bombers were built in WW2. The 112-acre plant which operates 24 hours a day became a dedicated Jaguar factory in 1980 and today, the XF Sportbrake is built on the same assembly line as the award winning Jaguar XF saloon.

To accommodate the XF Sportbrake, Jaguar Land Rover selected Comau to build a dedicated tabbing and framing cell in E Block. This cell takes the Sportbrake body floor out of the existing XF saloon assembly line to have the unique side body panels, roof and other components put in place, tabbed and then welded by robots before being returned to the main assembly line.

Comau selected LB Foster Materials Handling to design, manufacture and install the conveyor system, lifts and transfer cars for this new cell. The first stage of the project included a powered roller conveyor, mounted on a hydraulic scissor lift table which in turn was mounted on a traverse car, to create a ‘bridge’ over some of Comau’s equipment. The lift has to raise the body floor some 1.75m off the floor to enable it to enter the tabbing and framing cell.

When the body floor is received into this first station, operators manually attach the side body panels and other structural elements which are tabbed to hold them in place for the welding. Once this work is complete the scissor lift raises the body and the transfer car moves forward at the required height to feed it into the welding area.

The roller conveyor supplied by LB Foster at this station was mounted on a special precise lifting assembly provided by Comau. Once the body is in the welding cell, the conveyor is lowered leaving the body, still on its skid, clear of the conveyor to enable welding by robots.

This tabbing and framing cell was designed so that there was always the potential to extend the system to provide extra capacity as production increased.

The second stage of the project required LB Foster to complete a special ‘take-out’ station to provide an inspection facility for quality purposes. The work had to be completed over one weekend and involved the modification of an existing transfer car.

Two apertures had to be cut out of the sides of the transfer car to allow a new extending fork transfer device, with a cam lift, to extend one side and pick up the body from the transfer car. It is then moved in the opposite direction and deposited on a modified roller bed, outside of the fenced area, so operators can carry out a quality inspection on the assembly.

The final stage of the project in E Block involved providing a ‘one- way through’ route from the welding station back into the main production line. This was achieved by installing a powered roller conveyor, mounted on a scissor table, just after the welding station and another unit at the start of the return line.

The side transfer was accomplished using another extending fork system, but this time without a lift. The forks move the body on its skid some 6.75m across to the return line where it is then deposited onto another powered roller conveyor mounted on a hydraulic scissor lift table which lowers the body down to the floor before moving it onto a transfer car. This car runs on twin steel running tracks cast into the concrete floor.

The car has its own on-board controls which were designed and installed by Comau. There is no physical link between the car and its power source; it is all done through an induction cable system, again cast into the concrete floor.

The biggest challenge was building and installing the new cell without interfering with the operation of the existing main assembly line. This was particularly difficult because the new cell utilised existing equipment and so everything had to be very carefully planned to ensure minimum disruption.

It wasn’t an easy project to deliver as Comau and LB Foster had to match-up new equipment with existing machinery. This was achieved whilst working within a confined area and to a tight time frame. The result was an effective solution that dovetailed into the existing main assembly line. It was completed and operational to the time line agreed.

Research reveals how to manufacture a world class leader