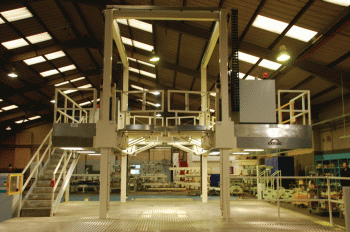 Gary Sweeney, managing director of leading conveying and materials handling specialist Exmac Automation, discusses the benefits of transferring automotive assembly technology into the aerospace industry, and offers an insight into the specification and manufacturing processes to be considered.

Exmac Automation has recently completed an engine handling project for the Rolls-Royce facility in Derby. Besides prefacing a unique method of automated assembly within the aerospace industry, the automated process for the transportation, assembly and build of large aircraft engines also highlights the transfer of technology between the automotive and aerospace industries.

Experience of conveying and handling systems for complex automotive assembly plants such as those at Intier, Aston Martin, Jaguar and Land Rover can certainly help aerospace customers understand how automotive systems operate and, more importantly, convince them that similar systems can be made to work for aircraft engine assembly.

Advanced flowline control technology similar to that used in automotive plants can be implemented in the aerospace industry and indexing systems and TACT (Total Average Cycle Time) can be scheduled to produce the much smaller production cycles and indexing required by aero engine assembly facilities.

For example, moving equipment around using automated skillet-based flowline systems, supplemented by AGVs, could for many manufacturers represent a step-change in engine assembly and make static engine production a thing of the past.

The mechanical detail of such a system would need to cover elements such as design, equipment, safety, parts logistics, etc, in order to arrive at an effective specification, and would need to involve personnel from the customer’s lean manufacturing experts and operational teams.

Benchmarking exercises can be used to determine the best way to move engines and help to compare options such as the use of conveyor or skillet systems, overhead or floor level positioning, and indexed flowlines or build platforms. It is unlikely that any single system will be exactly what the customer wants because all processes are different, but benchmarking does enable customer and supplier to learn enough to develop the concept. 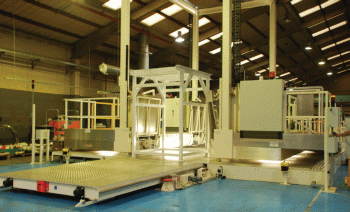 It is very likely that the customer won’t have been involved in anything quite like this so there will be a level of education, so a suppliers experience installing systems into assembly plants will be invaluable, enabling them to offer options and explain the pros and cons of different systems. The combination of a technically experienced supplier and an intelligent customer, both committing appropriately qualified resources, invariably leads to ultimate success, especially if both companies make changes during the simultaneous engineering process.

To future-proof systems – both for expansion and upgrades – it is possible to create systems similar to the ‘plug and play’ concept used in computers. For example, an electronic manufacturing system (MES) can be available at each workstation, interfacing with highly skilled operators to introduce more process and quality control into production schedules. Traditional assembly manuals, supporting paperwork and documentation become redundant, as MES monitors can display photographs, videos and descriptions of the various processes involved.

Skillets (effectively moving platforms) can be designed with integral slewing rings to provide assembly operators with access to all sides of the equipment by rotating it as it moves through the build process. Stations can be equipped with benches, an area for racks and components and mounting points for MES consoles.

Let’s also not forget that automotive assembly systems can be automated to re-circulate and return empty skillets to the start of a line.

However, the extended TACT times and the much heavier skillet loads involved in aerospace assembly, requires a different solution. It didn’t make sense to have an automated skillet return for such a slow moving, heavily loaded system, so alternative return systems need to be considered, for example a manual process using tug units.

The Derby project was developed as a simultaneous engineering project with the company’s engineering team and proved to be a major success. As a result Exmac has since been awarded a contract for a new, highly-automated facility that is currently being constructed in Singapore.­

Another recent aerospace contract involved the design and manufacture of test facilities for aircraft nose wheel landing gear, which were designed to measure a deflection of 56 tonnes of compression on the vertical rig; and check the turning moment to radians of a degree. This involved the design of a bespoke press that could exert the required pressures to test and measure the compression; and test the accuracy of the radial movements of the turning gear for the nose wheel landing system. The test facility was manufactured at our Worcester plant and fully tested before delivery to the customer’s site.

From simple to complex