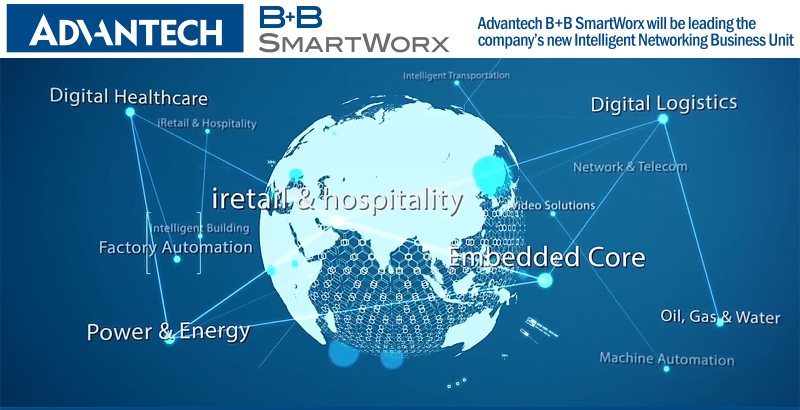 The two companies’ complementary product lines brought them together often over the last decade to collaborate on industrial connectivity projects, so the combination of the two companies felt natural. The merger creates a $1.3 billion company with approximately 7,600 employees worldwide.

“B+B has undergone a transformation over recent years, acquiring several companies itself and developing technologies that bring ‘intelligence to the network edge’ to address evolving needs in the Industrial IoT (IIoT) market,” said B+B CEO Jerry O’Gorman. “We are pleased to join forces with Advantech, a global leader who shares our strategic view of the future.”

With B+B SmartWorx now a part of its portfolio, Advantech said it aims to accelerate its growth in industrial network connectivity-related products.  The company will leverage B+B’s established branding, product lines, engineering teams and sales channels in the U.S., Europe and the Middle East, and it will also begin selling B+B’s device connectivity products, cellular routers, gateways and the Wzzard wireless sensing platform into Asia.  Products will retain B+B branding, bolstered by Advantech’s name recognition, and sold as “B+B SmartWorx powered by Advantech.”

Advantech chairman KC Liu explained that Advantech views this acquisition more as a merger, seeing value in all of B+B’s networking products from wired networking and fiber infrastructure to wireless connectivity. “B+B has in particular struck a nerve with its Wzzard wireless sensing system which satisfies enterprise IT’s desire to receive data from the field, and overcomes field OT’s (operational technology) fear of disruption, by creating ‘overlay networks’ that leave existing programming, processes and people in place,” said Liu.

B+B’s Wzzard together with its routers and gateways complement Advantech’s own WISE wireless sensing platform, and company engineers will be developing solutions leveraging the strength of both platforms.

Rubber repairs made easy with fast-set kit from 3M