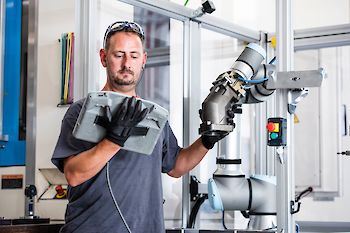 Universal Robots (UR), the trusted and widely-deployed collaborative robot (cobot) manufacturer, has announced that BWIndustrie, a French specialist in machining, assembly and robotics, has installed the world’s first UR16e heavy-duty payload cobot. It becomes the company’s sixth cobot from UR, where it is streamlining the time-consuming and labour-intensive process of deburring metal parts.

Launched at China International Industy Fair to wide acclaim, the UR16e enables BWIndustrie to overcome the barriers of traditional manufacturing by automating the deburring processes in a matter of seconds compared to the several minutes incurred by manual labour. According to Raphaël Schwartz, head of robotics and maintenance at BWIndustrie, this has seen a significant decrease in musculoskeletal disorders among the workforce.

He explains: “Previously, our workers had the task of deburring the metal parts. This saw them handling several hundreds of kilograms (kg) of parts per day and was an extremely time-consuming and arduous process, having a knock-on effect on their health.

”The UR16e allows us to remove our human workforce from the equation, letting them to focus on activities that are more rewarding, protect their health and has the biggest impact on the business.”

Designed to work alongside its human counterparts, the UR16e boasts an impressive 16kg payload capability and can carry heavy end-of-arm tools or lift multiple parts in a single pick. This saw BWIndustrie consolidate its deburring operation with the cobot now handling metal parts weighing from 4 to 14 kg.

Utilising Universal Robots’ TCP remote function (a touchscreen tablet), BWindustrie could quickly program the UR16e with an external tool with the capability to mirror the complex movement of operators. This ensured that a wide range of products of various shapes and sizes could be processed.

“For us, this capability is essential as the diversity of size, weight and shape of parts proved problematic for our human operators,” says Schwartz. “If you consider that we produce around 300,000 parts per annum, consistency is vital. Our UR16e guarantees this and so much more. We can now achieve unrivalled quality and maximise our throughput. This allows us to accelerate our time-to-market and expand our profit margin.”

Jacob Pascual Pape, regional sales director, South EMEA & UK at Universal Robots, concludes: “We are delighted that BWIndustrie has once again invested in our market-leading solutions. The company integrated its first cobot into its operations in 2011 and has taken advantage of the technology’s rapid payback time to grow its use of automation over time. This is a testament to our solutions which are being increasingly adopted by manufacturers to optimise production lines, unburden human workers and sharpen their competitive edge.”

Detecting defects with thermography during the additive manufacturing process