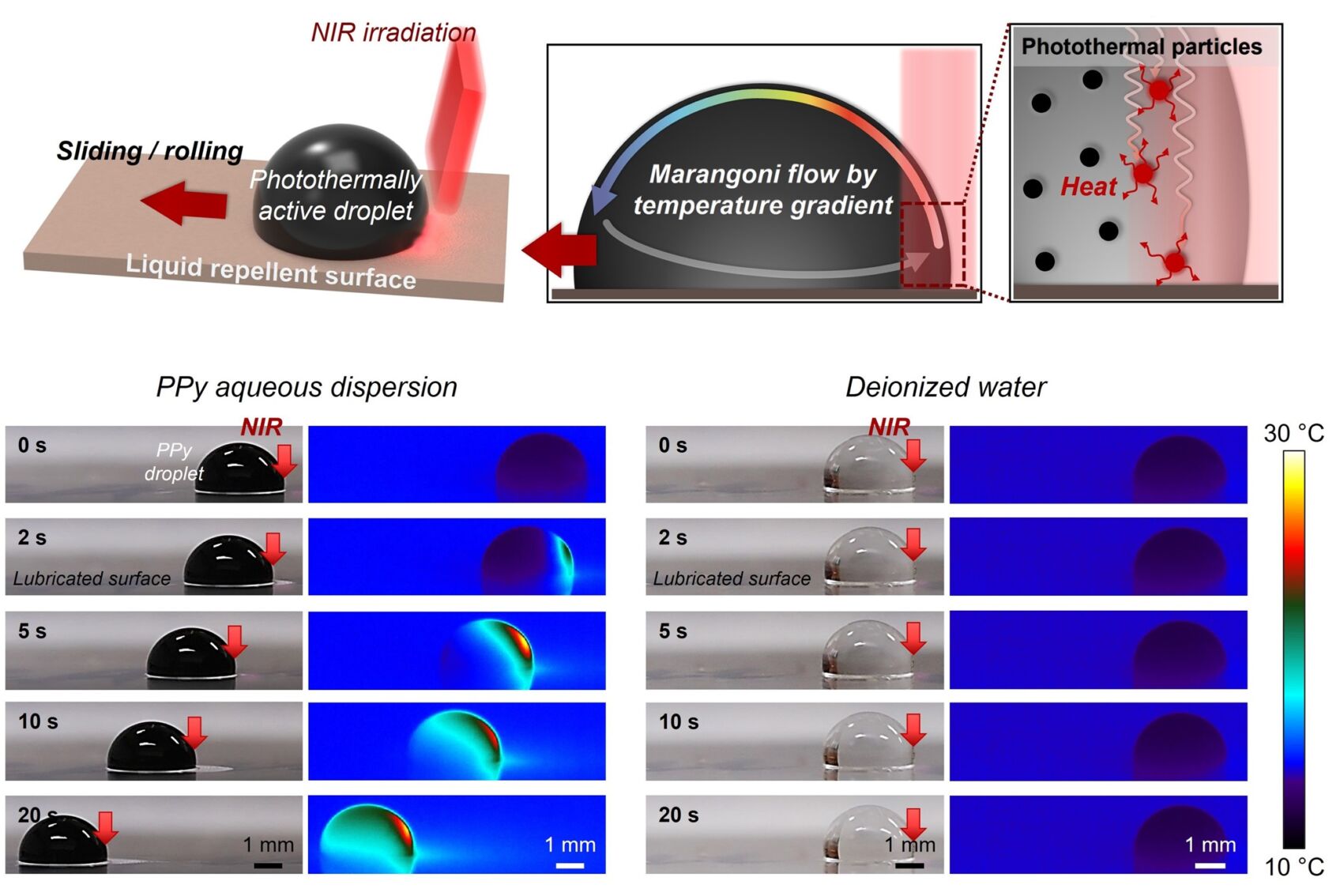 Microfluidics—a field of technology that deals with the manipulation of very small volumes of geometrically constrained fluids—has enabled powerful laboratory tools for molecular and cellular biology, and has found several applications, including lab-on-a-chip devices, micro-engines, and miniature reactors.

There are many types of microfluidics technology. One approach that is rapidly gaining traction is droplet-based microfluidics, which involves precise control of the movement, mixing, and splitting of small droplets on lubricant impregnated surfaces.

One way to achieve this is by using heat to make a droplet move. This creates a temperature gradient inside the droplet, inducing a phenomenon called the “Marangoni effect.” This is characterized by a flow from a lower surface tension region to a higher surface tension region, the surface tension difference being induced by the temperature gradient in this case. This “Marangoni flow,” in turn, provides a way to control the droplet’s motion. However, in previous studies, the temperature difference inside the droplet was created by simply heating the substrate on which the droplet was resting. This makes it difficult to precisely control the direction of the droplet’s movement. Moreover, heating the substrate requires a substantial amount of energy and narrows down the scope of suitable substrates.

To tackle these issues, a team of scientists led by Dr. Sanghyuk Wooh of Chung-Ang University, Korea, developed an innovative strategy. In their latest study published in Advanced Functional Materials, they presented a new way to induce Marangoni flow in droplets and control their motion using near-infrared (NIR) light, an approach that is contact-free and allows much more precise control.

The proposed method is substantially different from conventional thermal techniques. Instead of heating the substrate, the team heated the droplets directly and remotely. However, water and other commonly used fluids do not absorb much NIR light on their own. To address this, they added a small amount of polypyrrole nanoparticles into the droplets, which helped absorb NIR light and convert it to thermal energy. This, in turn, created a temperature gradient, making the droplet move away from the NIR light. The resulting Marangoni flow could be easily controlled by tuning the power and position of the laser. It also allowed an equally straightforward control of the direction of droplet motion on the substrate.

The team also tested their approach using various types of liquid repellent surfaces and fluid mixtures, such as water and ethanol. Interestingly, they found that the composition of the droplet significantly affected the direction of the Marangoni flow. Put simply, both the composition and internal thermal gradient of a droplet dictated the direction in which it moved. In fact, it was even possible to make a droplet move backwards (towards the NIR light). Additionally, on using a superamphiphobic surface exhibiting a water contact angle over 160°, spherical droplets demonstrated a rolling motion instead of sliding.

The findings of this study have important implications for academic research as well, as Dr. Wooh points out: “Droplet manipulation is at the core of many phenomena in basic and applied physics, chemistry, materials science, and engineering. On a more fundamental side, our work provides quantitative insights into the mechanisms of droplet motion.”