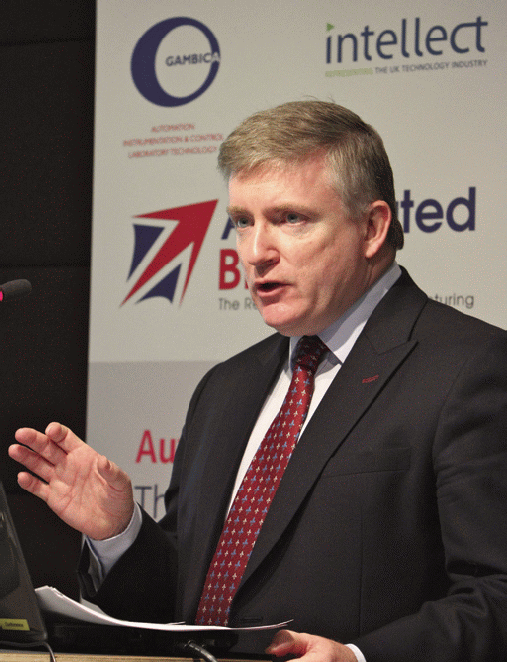 The announcement of Nissan’s investment of £125 million into Britain, for the unveiling of a new concept model to be manufactured at a state of the art factory in Sunderland, formed the backdrop of a Government address to elated delegates at the Automated Britain conference.

Intellect and GAMBICA held the joint event on March 6, 2012 at The Commonwealth Club in London to promote the concept of automation and its benefits to industry. Called Automated Britain – The Renaissance of UK Manufacturing the event explored whether there are any perceived obstacles that discourage industry from making more investments of this type.

Keynote speakers included Mark Prisk MP, the Minister of State for Business and Enterprise and Juergen Maier, managing director of Siemens UK Industry. Case studies were presented by major automation companies such as ABB, Emerson, Honeywell, Rockwell and Siemens in tandem with the manufacturers that use their technology.

Mark Prisk told the conference, “Nissan estimates that the investment will create and safeguard 2,000 jobs. That news is, in my book, a real vote of confidence in the UK automotive sector. It vindicates the decision we took to put manufacturing back at the heart of our economic strategy.

“Modern manufacturing requires a continuing commitment, not only to technological investment, but to a culture of innovation. There are several examples here today, so we already have British firms leading the way. Despite difficult spending decisions elsewhere, we took the decision to ring-fence and maintain a science and research budget at £4.6 billion, and to increase capital investment by £500 million.

“We have taken on the principle of the Technology Innovations Centres to ensure that we smooth the path from original research to commercial success. We call them ‘Catapults’ for the simple reason that they are about propelling ideas into commercial ventures. The first is funded at £140 million over the next six years and focussed on high value manufacturing.”