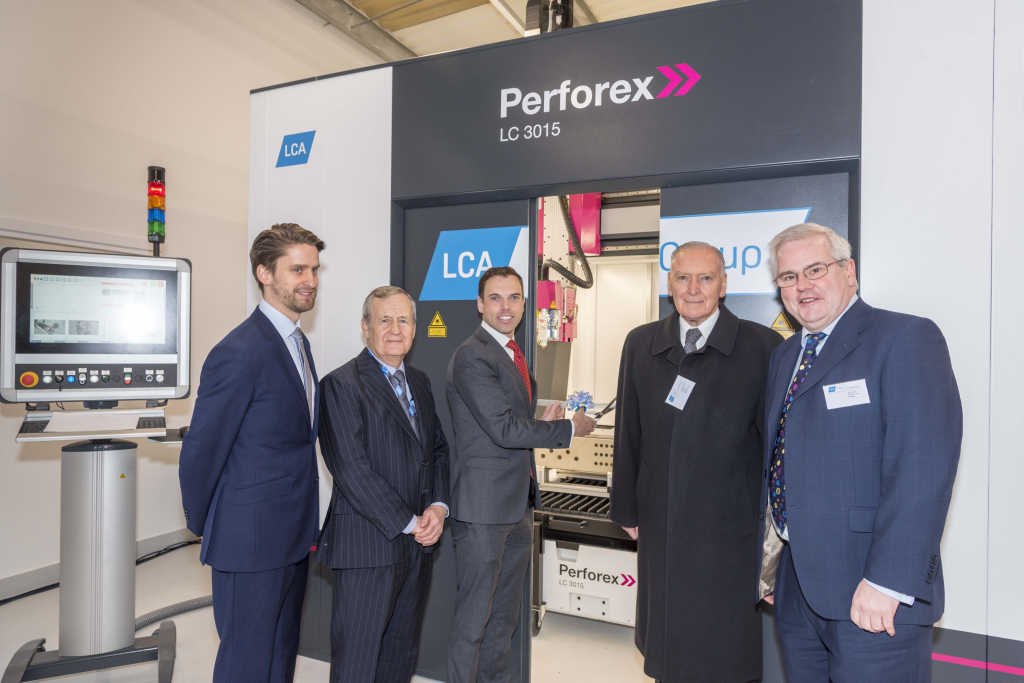 Electrical engineering specialists LCA Group is looking ahead to a sparkling future after the Welsh Government’s Cabinet Secretary for the Economy Ken Skates joined staff and management to open its new state-of-the-art manufacturing facility in North Wales.

Mr Skates cut the ribbon at the new building on the Hawarden Industrial Park, which is named ‘Gibson House’ in tribute to the famous Dambusters pilot and the many Lancaster bombers built close to the site, near Hawarden Airport, during WWII.

LCA Managing Director Alan Sheppard and David Williams, who chairs the LCA Group board, spoke about the firm’s future and its commitment to North Wales business at the event, which was also attended by Alyn and Deeside MP Mark Tami as well as regional business leaders.

And Mr Skates praised LCA’s investment in the area, as well as in people and technology, describing the facility as ‘magnificent’ and ‘something we can all be really proud of.’

The launch event was rounded off with chance for the invited guests to view LCA’s new £500,000 ‘UK first’ 3D laser machining centre.

The move will mean the consolidation of the two existing LCA Group sites – in Runcorn and Ewloe – under one roof, enabling the company to significantly expand its service offer to customers around the globe.

As part of the move and to cope with increasing demand from customers around the globe, LCA Group is currently seeking experienced control panel wiring experts and will set out on a wider recruitment drive for a range of new roles at the company during the early part of 2018.

According to LCA’s Managing Director, Alan Sheppard, the 35-year old electrical and engineering firm has earmarked 2018 as a critical year for the business.

“Everyone at LCA Group is excited about the future. We’re delighted to be able to retain our experienced, committed team as part of the move, and we hope many more people will join us during 2018 as we now have the capacity to expand our workforce as part of the move to Hawarden.”

Cabinet Secretary for Economy and Transport Ken Skates, who spoke at the event, said: “This really is a state of the at facility and a magnificent place. They have cutting edge technology and highly skilled, well paid people and Gibson House is something we can all really be proud of.

“As we enter the fourth industrial revolution we need to make sure that we’re equipping people and businesses with what’s needed in order to thrive rather than just survive and I think that’s exactly what LCA Group is doing.

“The Welsh Government is passionate about growing our economy and this is precisely the kind of business that we want to see growing in Wales.

“We have just published our Economic Action Plan and at the heart of that is a call to action to future proof businesses make sure we are strengthening the foundations of our economy.

“We have to make sure that we keep selling ourselves to the world and we tell the world that Wales is a great place to invest in. Wales is very much open for business.

“LCA is at the forefront of meeting what the Government aspires to do in years to come and the company clearly has an incredibly bright future.”

The announcement comes just a few weeks after LCA announced it is to install new “UK first” Rittal 3D design and manufacturing technology.

The investment in the new Rittal Automation Systems 3D laser machining centre – now housed in the Hawarden facility, the only one of its type in the UK and one of only seven similar machines in the world – will enable LCA Group to dramatically boost production of its leading stainless steel control panels.

Traditionally made by hand by experienced electrical engineers, who will all be retained as part of the move to Hawarden, the manufacture of LCA’s leading control panels is essential in a range of industries including nuclear, food manufacturing, power generation, water and utilities, oil and gas and pharmaceutical.

“It’s a really exciting time for the business and we’ve received some fantastic advice and support from Business Wales and the Welsh Government to get us to this point,” Alan added. “It’s a great environment to do business, and an attractive place for our people and our business to flourish.”

Colin Brew, Chief Executive of the West Cheshire and North Wales Chamber of Commerce added: “News of LCA’s decision to locate in Hawarden is a fabulous boost for the region’s economy, bringing much needed opportunities for our young people and cementing the role of North Wales as a leader in the advanced manufacturing sector.”

The new facility is based on the site of the former Davies Bakery, just a stone’s throw from Airbus and Hawarden Airport, where more than 230 Lancaster bombers and 5,500 Wellingtons were built during WW2. In tribute to the famous aircraft, the new building will be named Gibson House, after Guy Gibson who famously led the 1943 Dambusters raid.

The investment in the new building will mean LCA Group can deliver more control panels, faster, better, more efficiently for customers across the world. It will also be able to service higher volume orders, or rapid turnaround of bulk orders – including next day delivery – from the new year.

“And we can do all this without compromising on the quality we’re famous for,” Alan added. “We have some incredible people, doing amazing things. Add to that a facility that it fit for purpose and fit for our growth, and the innovation investment to support them, and we see 2018 as a very important year for us.

“We are an ambitious team and we hope this investment will set us apart from our competition in the UK market.”

More details about the company’s recruitment in January and February will be announced soon.

The breakthrough of the smart robots

Multipix reviews Smart Cameras – Which suits what application the best?