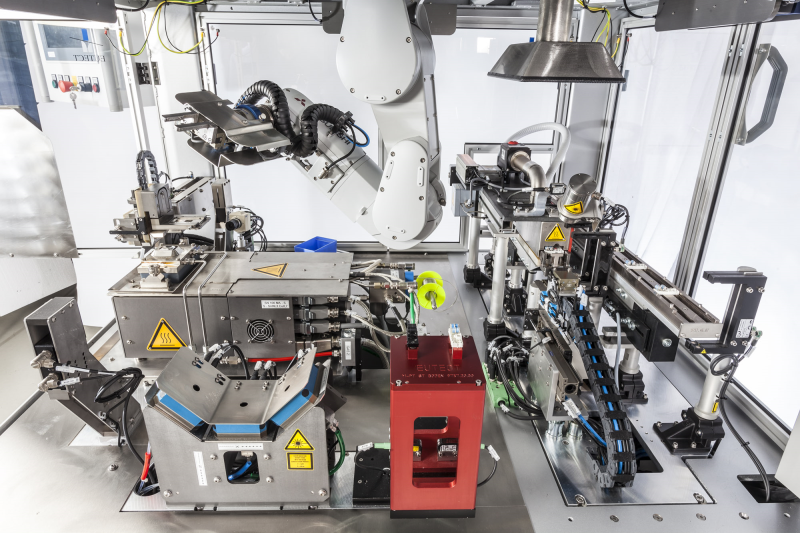 The Swabian EUTECT GmbH has concerned itself for over 20 years with the soldering of electronic assemblies. From the beginning, standard off-the-shelf solutions weren’t in the foreground, but solution concepts that allowed the soldering of complex assemblies in the shortest time thanks to laser soldering or mini wave. For this reason, EUTECT GmbH kept developing new soldering modules in order to be able to offer its customers the proper solutions for their soldering tasks.

‘A fundamental milestone was reached in late 2008. At that time the idea of integrating a robot from above into one of our cell concepts was in the air. So there was this used Mitsubishi 6-axis industrial robot for my son at Christmas’, recalls Manfred Fehrenbach, founder and proprietor of EUTECT GmbH, smiling and continues, ‘we integrated the robot into one of our compact automation cells with the desire to develop a really highly flexible solder system for our EUTECT technical centre. Due to our clever robotic gripper and magazine concept, it proved possible to integrate the process modules for laser, thermode, induction, and automated piston soldering into a system on just 2 m².’

EUTECT GmbH had already developed the compact, highly flexible automation-cell concept with scalable cell sizes in 1998. The first EUTECT SMART soldering system was built in the year 1999, and it enabled automated flux application, pre-heating, and soldering with X-Y-Z servo-axis kinematics on only 1.5 m² of floor space. 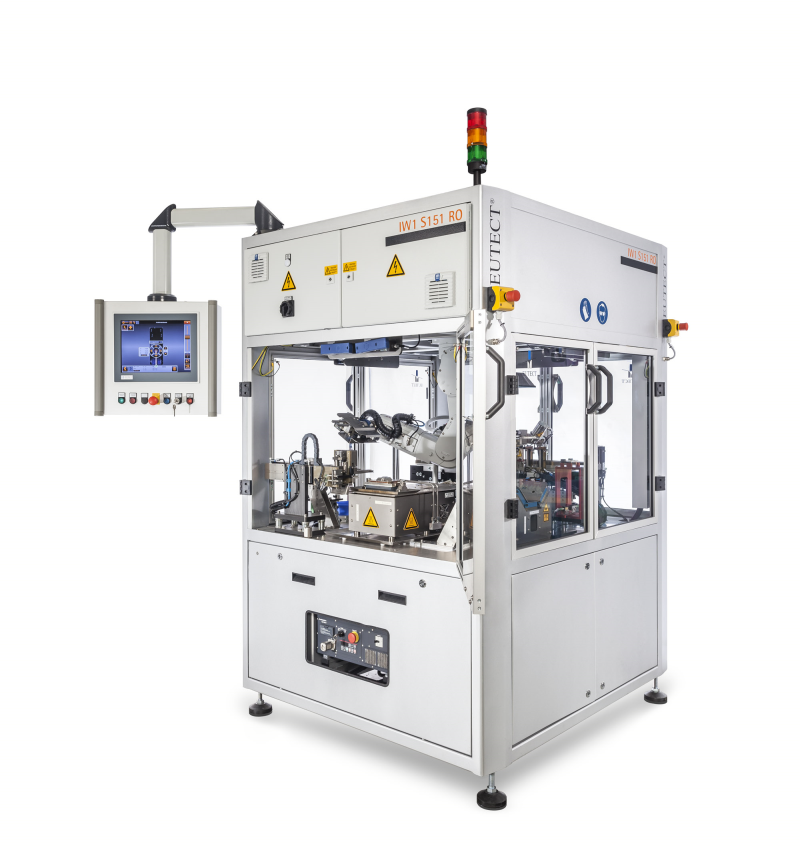 This space-saving cell concept as well as the newly developed robotic soldering system were important impulses for EUTECT GmbH’s efficient new machine concepts and automation solutions. By integrating robots, the developers succeed in fitting a maximal number of process and test modules into the already compactly structured production cells on a minimal footprint. ‘In 2008 we were in a position to integrate these three core processes in-line on just 1.5 m² with a Mitsubishi articulated-arm robot able to bear 6 kg. The machine was moreover equipped with a conveyor-belt inlet and outlet as well as with an additional pre-heating module and various test modules’, Manfred Feherenbach mentions proudly. The benefits for the customers were obvious.

Compact production cells take up less floor space. Thus more space remains for necessary production logistics and preparatory or follow-on processes. Clever gripper solutions minimize tooling costs, increase the soldering system’s flexibility, and thus also the capability to process individual product versions with just one system. A further great benefit is the freely selectable process-module arrangement in the systems. Through direct consultation with customers and users, process modules such as flux-application or soldering modules can be placed so that they are optimally accessible for servicing and maintenance. Thus system downtimes and material and space costs as well as personnel expense are diminished. The efficiency of overall production is therefore automatically increased.

EUTECT GmbH developed the innovative software solution EuRoC in addition to these mechanical innovations. The software was first introduced in 2009. It enables integrated robots to be programmed without having much previous knowledge. The machine can be most simply operated, moved, or its sequences optimized via the intuitively operated EUTECT machine interface (EMI). The operator can therefore create new programs and sequences for additional products in a short time off-line as well as on-line.

The possibility of being able to move an articulated-arm robot and the associated product grippers with complete freedom in space extends the radius of possibility and maximizes the utility of spaces and processes. Up to four different gripper/solder-mask combinations can be stored in a system and tooled fully automatically, which enables a large number of product variants to be processed.

‘Meanwhile we’ve been selling a variety of cells with the axis robot integrated from above. It’s exactly those of our customers wanting to unite the most varied process steps in the cell who value the space-saving transportation of the workpiece support by the robot arm mounted above. My Christmas gift from 2008 has meanwhile become a complete success’, says Feherenbach’s son, Matthias Feherenbach, who has since then become part of management.

Indeed, integration of the 6-axis robot was just one step towards a clever soldering-automation solution. ‘We had to consider a solution for transporting the assemblies before and after the soldering processes’, recalls Feherenbach Jr, because in conventional productions complete workpiece supports (WT) with all of their functions are frequently conveyed through the system along with the product being processed.

Such workpiece supports are exactly those that are difficult for the 6-axis robot to move because of their weights and dimensions. ‘These WTs often exceed the 6 kg mass and are thus simply too heavy for our systems. We have developed an in-house WT generation for this reason’, explains Feherenbach Jr. The EUTECT workpiece-support combination enables these to be grabbed directly from the belt with a robot and/or a handling kinematic via an attachable, product-specific satellite support. The satellite supports are simply transported to the individual processes. The satellite support is free of any functions and serves only to move the assembly within the soldering system. After process completion, the support is once again set onto the conventional WT, which is waiting in front of the soldering system.

Satellite supports are always produced with lightweight construction due to the material and energy efficiency required. This also allows smaller robots with lesser bearing loads to be integrated whereby additional costs can be avoided. The satellite supports can be procured with lower cost and retooled quickly and easily during product or variant changes. A complete workpiece support as well as buffer or WT storage for each product variant can be thereby dispensed with. Additional spare-part storage and further investment costs are likewise avoided. The great benefits of EUTECT’s workpiece-support combination are thus material- and space-cost as well as time-expenditure savings.

‘All in all, clever robotic soldering automations in connection with EUTECT’s workpiece-support combination enable palpable production- and cost-efficiency increases. At the same time, we achieve a sustainable flexibility and efficiency increase in order to manufacture the customer products of tomorrow without really knowing today what they are will be’, summarized Matthias Feherenbach.