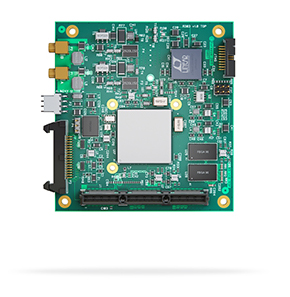 The Coaxlink Duo PCIe/104 is a ruggedised stackable card compliant with the PCIe/104 form factor. It features an extended operating temperature range, optional conformal coating and is able to withstand high levels of shock and vibration. It provides two CoaXPress CXP-6 camera connections and a PCIe 2.0 (Gen 2) x4 bus.

CoaXPress provides a high speed interface between the camera and the frame grabber. In its simplest form, CoaXPress uses a single coaxial cable to transmit data at up to 625 MB/s, simultaneously transmitting control data and triggers and providing up to 13W of power to the camera. CoaXPress outdoor cameras are available with characteristics that meet the most demanding applications in defence and high-end surveillance applications.

Features at a glance:

Find out more about the Coaxlink Duo PCIe/104