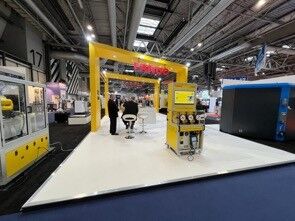 Held at the Birmingham NEC on 4-8 April 2022, FANUC’s on-stand displays highlighted to end-users and machine builders alike the strength and breadth of the company’s automation offering, showcasing welding technology, collaborative robotics and laser processing solutions across the full factory line.

FANUC was joined on Stand 130 by several of its system integrator partners, including Cyber-Weld who have partnered with FANUC to create the Cyber-Mate. Incorporating FANUC’s CRX collaborative robot with a non-contact, laser-guided, smart camera, it uses adaptive technology to automatically adjust the welding head to improve weld quality and reduce production costs for automated welding applications. Housed in a compact, movable trolley featuring a handy tabletop, it enables users to start welding from the day of delivery, as FANUC’s Paul Coombes explained: “Cyber-Mate’s strength is in its ease of deployment. Using tabletop clamps, users can quickly run off a batch of parts, change the jig, and repurpose the trolley for other welding tasks.”

Also on display was the Flexlase laser processing machine, produced in conjunction with Cyan-Tec, which can cut or weld using a wide range of different laser sources such as laser processing optics, laser power and component fixturing. Another demonstration machine was FANUC’s QSSR (Quick and Simple Start-up of Robotisation) package, which creates a standard interface to facilitate the connection of a robot to a machine tool, simplifying set-up and subsequent operation.

Ray Timberlake, FANUC UK Sales Manager, said: “QSSR uses a two-path control, the first controlling the machine and the second controlling the robot. Typically, a machine tool builder will use G-code, the most widely used ISO computer numerical control programming language, to control movement, while the robot has always used its own language. With QSSR, we use G-code to control the robot as well, so there is no learning curve for the operator. This set-up is aimed at machine builders who want to easily offer added robotics functions to their machines.”

FANUC UK Managing Director Tom Bouchier commented: “It was great to be back at MACH again after a two-year hiatus, and to see the industry pulling together. We were pleasantly surprised by the footfall and the quality of the enquiries we received this time was much higher than at previous shows. It’s clear that UK firms are really waking up to the power of automation.”