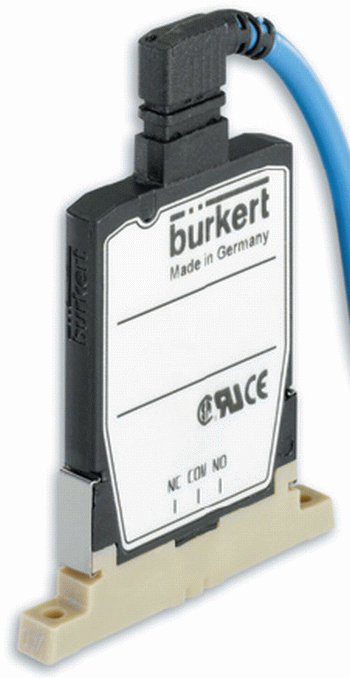 Burkert’s new Type 6650 miniature solenoid valve, with its patented Flipper technology, has proved to be a suitable solution for KBioscience, a British life sciences company that has developed its own machine, the Meridian, to provide improved performance, reliability and operating life in the genotyping pipeline.

Among other things, KBioscience, supplies consumables, such as reagent kits, and in 2007, when it was dissatisfied with the reliability and performance of its existing equipment, it designed and produced its own automated dosing machine, The Meridian, for reagent and sample transfer. The problem with the old machine was clogging of the dosing heads that performed the dispensing of reagents caused by a build up of salts in the miniature bore size valves used to perform the dosing operation. Sean Scotcher, head of projects, says Burkert’s 6650 miniature solenoid valve was found to be least prone to blockage and its 4.5mm pitch allowed them to pack the valves together tightly.

The Type 6650 is designed specifically for use in clinical, life-science, analytical and fluid handling equipment. Its Flipper Technology employs an elastomer element which moves between two opposite valve seats under the force of permanent magnets fixed to the flipper element; opening one as it closes the other. Only a temporary pulse is required for this operation, so the 6650 is characterised by its short response time. With the adoption of the Type 6650, KBioscience is nearing completion of the Meridian. It plans to sell the machines to its existing customers, domestic and across wider international markets.