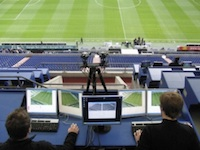 With video analysis an essential part of professional football, all clubs in the first and second divisions in Germany used the VIS.TRACK tracking system during the seasons 2011/12 and 2012/13. In addition, trainers of FIFA World Cup winners, Germany, used parts of this system (VT.PanoramicView) during the tournament preparations. VIS.TRACK was jointly developed by deltatre (formerly known as IMPIRE) and STEMMER IMAGING.

VIS.TRACK monitors position coordinates for every player, the ball and the referees at all times during the game to allow calculation of players’ total running performance including average and maximum speeds, number and intensity of sprints and the distance covered. The system can provide statistics for the entire team for immediate analysis, so that at half-time tactics can be set by understanding both the team and the opponent’s performance during the first half.

An enormous volume of data is generated during each match. The system records the X/Y coordinates of every player 25 times per second and stores them, yielding approximately 4 million position logs by the end of a match.  Data can be presented graphically, for example as speed graphs for each player which can document a player’s willingness to run over the course of a game. The extent of a player’s coverage of the pitch can be represented by a ‘heat map’. Tactical analyses can be made using 2D and 3D animations.

VIS.TRACK can either be installed permanently at a stadium or provided as a mobile system. Two HD cameras, supplied by STEMMER IMAGING and housed in a specially designed weatherproof housing are positioned at the centre line to give views of each half of the pitch. The image data are transmitted in parallel to four high-performance image processing PCs using the STEMMER IMAGING CVB GigE Vision server, with each PC performing a different processing function. STEMMER IMAGING’s Common Vision Blox (CVB) imaging toolkit was used by IMPIRE to develop the dedicated software package for tracking the players.

VIS.TRACK products can also be used for analysing training sessions. The resulting analyses provide the opportunity of adapting the training intensity for individual players, i.e. following injury, or to improve their current performance levels. For training sessions, the use of additional camera pairs on a computer system allows activities on several pitches to be recorded and analysed at the same time.