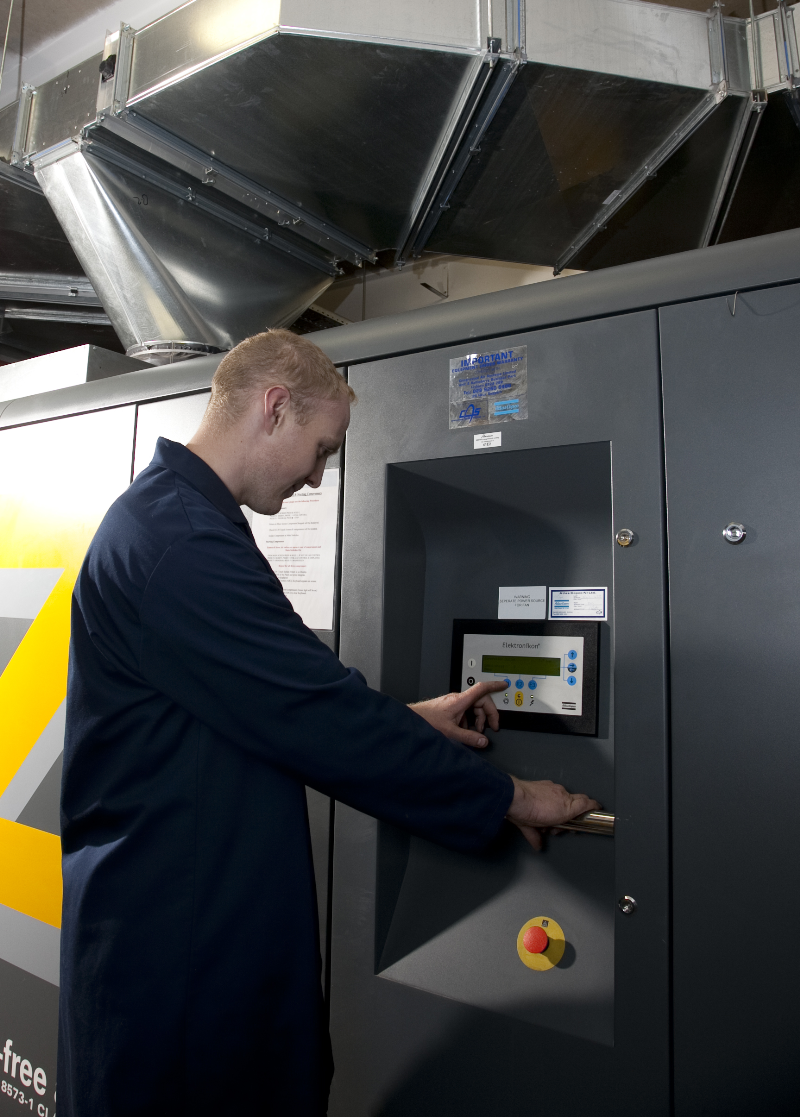 Greiner Packaging’s production plant in Northern Ireland is helping a neighbouring college cut its £40,000 annual heating bill by donating waste heat from its compressors and its process cooling installation.

Dungannon Integrated College, a secondary school with 500 pupils, receives the heat into its central heating system via underground pipework, not only reducing costs but saving 200 metric tons of CO2. Greiner Packaging, which is headquartered in Austria, specialises in the production of rigid packaging containers supplied to the food industry in Great Britain and Ireland.

Compressed air is essential for all of the company’s production processes and is supplied by Atlas Copco oil-free, water-cooled Z-range compressors – with their outputs optimised by a central controller. It is the compressors’ water cooling systems that provide an addition to the waste heat supply to the nearby school.

Air drawn into a compressor contains water vapour. Heat stored in the vapour is released through condensation in the inter- and aftercooler of the compressor. The condensation heat contained in the input air is equivalent to 5-20% of the electrical input energy. This property is fully exploited by the unique design of Atlas Copco’s Z-range of oil-free screw compressors with energy recovery capability, whereby the total energy recovered as hot water amounts up to 80-100% of the electrical input energy, depending on the site conditions.

This supply is combined with hot water derived from a large battery of cooling fans sited near the college, which assist the cooling cycle that is integral to the plastic forming processes undertaken at the plant.

As Jonathan Parr, the electrical services and plant manager at the site, explained: “The rapid sequence of heating and forming plastic materials requires equally fast cooling of the molten polymers. In this Greiner Packaging plant we achieve this with a large battery of condenser cooling fan units, in addition to the water cooling systems on the compressors, which extract the heat in the form of hot water at 80 degrees Celsius that is then delivered to the neighbouring school via 275 metres of pipework buried a metre underground.”

This community project, considered to be the first of its type, is reputed to have cost Greiner Packaging £90,000, a sum matched by funding from the Department of Education whose spokesman on the occasion of the launch event commented: “It’s a project that shows recycling, it shows an environmental responsibility and it shows social responsibility.”

Atlas Copco Compressors shares the same core values of sustainability and environmentally-aware approaches in its offerings to industry as the Greiner Packaging International organisation which has reported annual energy savings approaching 2.8 gigawatt hours of electricity and 320 megawatts of heat.

Greiner Packaging has earned a global reputation for producing award-winning, bespoke packaging designs in new materials such as PET, decorated with the latest in sleevings and printing techniques as well as items produced by injection stretch blow moulding processes.

Robotics and automation companies team up to deliver maximum reliability