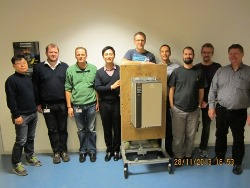 The Lotte World Tower in Korea might not be the highest skyscraper in the world, but it is definitely the largest measured in volume. And size matters when it comes to skyscrapers. Barb Park and his PE sales team in Danfoss South Korea got the order for the first phase of the Lotte World Tower by providing a solution to the customer that not only is cheaper in terms of operating costs, but also takes up less space – and space is money in a skyscraper.
“Our solution is half the size and weight than that of the competitors. And we have dedicated HVAC features which differentiate us from the competitors,” Barb Park said.
The VSDs (Variable Speed Drives) have a special fire mode function, which can cover the system control properly in case of a critical situation.
“If there is a fire in the building, it is very important to remove the gas and smoke. When our VSD gets a fire signal from the fire sensor, it will run in a pre-programmed way with highest priority. All other signals will be overruled in order to protect the people inside the building. Furthermore, the fans must be able to run at two speeds. There are two zones, and if zone 1 has a fire, the VSD has to run at 50% of the full speed. And if there are fires in both zone 1 and zone 2, the VSD has to run at 100% speed.”
The order that was placed is for the lower buildings in the complex, which altogether will cover around 800,000sq.m. But Barb Park is confident that Danfoss will also get the order for the main tower.
The South Korean team was up against other competitors such ABB, LS, Siemens Rockwell, Schneider, and Mitsubishi. But it is far from enough just to outperform the competitors. To win, the VLT Drives had to be tested according to the quality assurance of the Korean market, and the clock was ticking.
Henrik Nygaard Skov, product manager, explained: “Normally, you do all the testing in Korea, but that would have delayed the process by 6 to 9 months, and by then it would have been too late for us. Instead, we managed to have the testing done at our own facilities, with a Korean supervisor on hand who could guarantee our test results. And then we had to move fast to sort out the logistics in terms of locations, manpower, translating the Korean requirements and having all the gear needed for testing available.”
With 300 hours of testing on 8 test devices with 16 tests running on each, the 10 test engineers were more than fully occupied. The testing period was set to last a week, but the test team managed to complete all the tests in just 4 days.
Henrik said: “Although we already have an extensive quality assurance program for our drives, we are proud to say that all the Korean demands were also met in the tests. It is also worth mentioning that there was a really good cooperation between the Korean supervisor and the test team.”
For further product information regarding Danfoss VLT HVAC Drive and to download latest literature visit the website.

Siemens and Spire in tech partnership