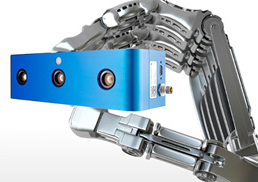 The Ensenso N10 3D stereo camera and MVTec’s HALCON Imaging Software combines together to create a powerful 3D solution that gets delivered factory calibrated and ready to work out of the box within minutes.  The Ensenso N10 works according to a new procedure called “projected texture stereo vision”, fitted with two global shutter CMOS sensors and a pattern projector, which projects a random dot pattern onto the object to be captured. The key advantage of the pattern is that it also works in multi-camera operation and is ideal for capturing unstructured surfaces. As the Ensenso N10 is factory calibrated, installation of the camera for 3D surface matching using the MVTec HALCON Software interface takes less than ten minutes out of the box. Using the Halcon free software interface supplied, you can also integrate the camera easily into your own application programs with great ease.

When working with multiple cameras, the software package also enables you to output a single 3D point cloud containing the data of all the cameras used. Using multiple cameras at the same time enables you to capture a scene synchronously from different sides, thus reducing shadowing effects and extending the field of view. The Ensenso N10 stereo 3D camera is designed for working distances of 280 mm to 1400 mm and for variable fields of view. Unlike other 3D recording procedures, the camera can capture both static and moving objects at up to 30 frames per second.

Using the projected texture stereo vision procedure, the projector projects a static, high-contrast texture onto the scene and adds structures that are not visible or are only faintly visible on the object. Combined with the new “semi-global matching” image comparison algorithm, the Ensenso N10 captures nearly all surfaces within the field of vision. The system works with pulsed infrared light and is highly resistant to external light influences.

The sturdy aluminium housing measures a mere 150 x 45 x 45 mm. The suitability of the camera for industrial applications is underlined by a lockable 3-pin M8 sensor/actuator connector with GPIOs for 12-24 V hardware trigger input and output as well as a lockable USB cable. The Ensenso N10 3D camera is suitable for a wide range of applications. However, applications in the areas of medical engineering, robotics and gripping technology, logistics, completeness checking, rapid volume measurement, as well as measurement technology and safety engineering benefit particularly from the innovative camera. With a refresh rate of 30 frames per second, the Ensenso N10 can be used completely in-line and is therefore ideal for use in 100% inspections.

The comprehensive software package, which is included free of charge, has an MVTec HALCON interface and an object-oriented API (C++), thus allowing optimum integration into existing systems.

Servicing contract proves to be a great catch