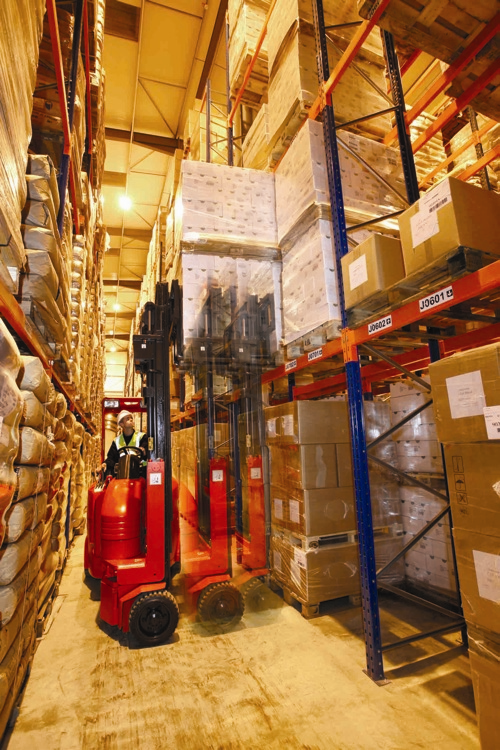 In addition, because the client needed the trucks to operate in a new warehouse that was due start receiving finished goods from its factory just six weeks after the order had been placed, the trucks had to be air-freighted to India.

The client, ITC, one of India’s largest FMCG and food companies, is a long standing Flexi user. The company now operates over 20 Flexi articulated forklift trucks across various production facilities and storage sites throughout India.

The company urgently needed to increase output at one of its food processing plants in the Pune region but was restricted by the storage capacity of its on-site warehouse which holds finished goods prior to their onward dispatch to retailers across the continent and beyond.

The introduction of Flexi articulated technology and reconfigured racking layout around a very narrow aisle design, allowed ITC to increase the pallet capacity of the Pune food store by 50% – which meant that the increased output from the factory could be stored within the existing facility.

“We are very active in the Indian market and trucks built at our UK production site destined for India are usually delivered by sea in container ships which can take five or six weeks,” explained John Maguire, Flexi Narrow Aisle’s sales and marketing director.

He continued, “Our existing supply chain model is efficient, but ITC’s needs were so urgent that it was agreed to ship the first two Flexis by air freight – which, of course, takes a fraction of the time that it takes a cargo ship to sail to India.”

In fact the two Flexis were built in only four weeks and were dispatched on a Friday and installed by the following Tuesday only four days later allowing ITC to start their increased production project on time.

In all ITC ordered a fleet of 16 Flexis. The remainder of the order will be dispatched by sea.

John Maguire added, “We are delighted to have been able to meet the challenge that ITC set us. Flexi Narrow Aisle is an internationally focused manufacturing company with great products and a respected brand and this is reflected in the growing number of overseas buyers who are investing in Flexi articulated truck technology.”

200 tonnes of yogurt per week