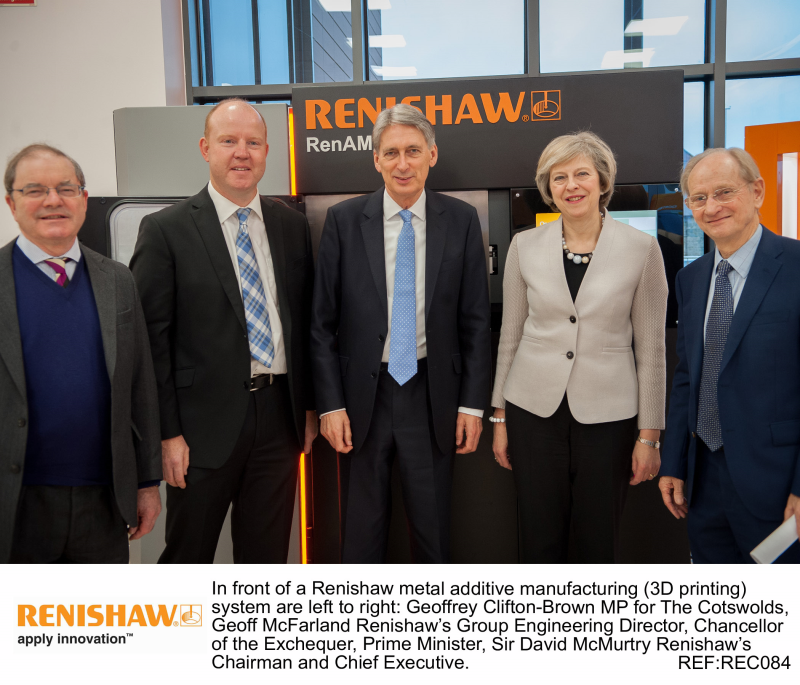 The Prime Minister, Theresa May, and Chancellor of the Exchequer, Philip Hammond, visited Renishaw’s headquarters site near Wotton-under-Edge in Gloucestershire on 24th November for a tour of the company’s main research and development (R&D) facilities. Following a meeting with senior Renishaw directors, the Prime Minister and Chancellor of the Exchequer toured the company’s Innovation Centre where they witnessed new technology developments in the fields of precision measurement, metal 3D printing and healthcare.

The visit came in the week that the Prime Minister announced the first steps in a new Industrial Strategy for the UK that will include a long-term commitment to research and innovation, including an increase in government investment worth £2 billion per year by 2020 for R&D and a new Industrial Strategy Challenge Fund to back priority technologies including robotics.

Renishaw annually invests between 13% and 18% of revenues in R&D and engineering, generating a high level of patents for products which are primarily manufactured for overseas markets. For its last financial year ending June 2016, some 95% of sales were due to exports and yet the majority of the company’s manufacturing is carried out in the UK at its sites in Gloucestershire and South Wales.

“It was a pleasure to host the Prime Minister and Chancellor of the Exchequer and to be able to show them how a long-term commitment to research and development, backed up by large investments in manufacturing, marketing and skills development, has enabled Renishaw to sustain success for over 40 years.

“In his Autumn Statement the Chancellor spoke of his ambition to achieve a high wage, high skills economy, and we fundamentally believe that to create wealth for our company and the nation requires innovation in the generation of new technologies, and as importantly, innovative manufacturing that enables those technologies to be produced profitably in the UK.”

During their tour The Prime Minister and Chancellor were shown how Renishaw technology is being applied to exciting new applications in healthcare including neurosurgery, dentistry and custom medical devices for facial reconstructive surgery. The latter are produced on Renishaw metal additive manufacturing (3D printing) systems, the only such machines to be produced in the UK. They also met apprentices and recent graduates, representing the company’s record 129 apprentices currently in training and an intake of 65 graduates in 2016.

“This government wants to build upon Britain’s strength in technology and engineering. We highly value research and development and that’s why the Autumn Statement included over £4.7 billion of new money to ensure the next generation of discoveries is made, developed and produced in Britain.

“Alongside the Prime Minister, I was able to see first-hand today why Renishaw is such a great British success story and meet some of the company’s apprentices and graduates to hear more about their work.”