Robotics and automation companies team up to deliver maximum reliability 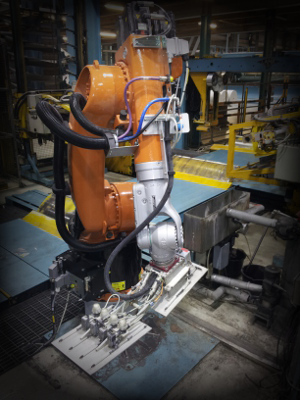 Following the waves of industrial innovation over recent years, as part of a fundamental drive to maximise productivity, a paper manufacturer has deployed industrial robots for label application to its finished products, the company’s Flintshire based paper mill faced some serious problems with one of the robots functioning on site.

According to the lines automation engineer: “Over the last couple of years our label applicator robot was becoming increasingly unreliable, resulting in a number of breakdowns which we cannot accept”. He added, “If we experience an 8 hour downtime event, it can lead to the mill stopping production”. The deteriorating reliability of the robot was clearly critical and warranted the purchase of a new robot.

The paper makers’ engineers thus presented their user requirement specification for a new robot to a few robotics companies. They explained that KUKA Robots, the German producer of industrial robots, most closely matched their brief in terms of capabilities and cost. The project engineer at KUKA Robots, commented: “Being cost competitive was an obvious key factor in winning the contract, but we also offered better overall value for the customer together with ongoing customer support throughout the project”.

KUKA Robots employed a 3G router solution and made sure that remote robot diagnostics are possible via LogMeIn (a remote control desktop website). According to their project engineer, the most challenging part of the project was calculating the arc the robot had to take relative to the roll diameter and width sent over the bus by the PLC.

The partner, Optima Control Solutions, an independent automation company, was approached by KUKA Robots and charged with the task of programming, installing and commissioning the new robot. Optima had to integrate the new robot with the existing machine control system.

Siemens to take on 160 new apprentices in the UK