Robotics and Automation in the MedTech Sectors: Technological Progress is Presenting an Array of Possibilities. 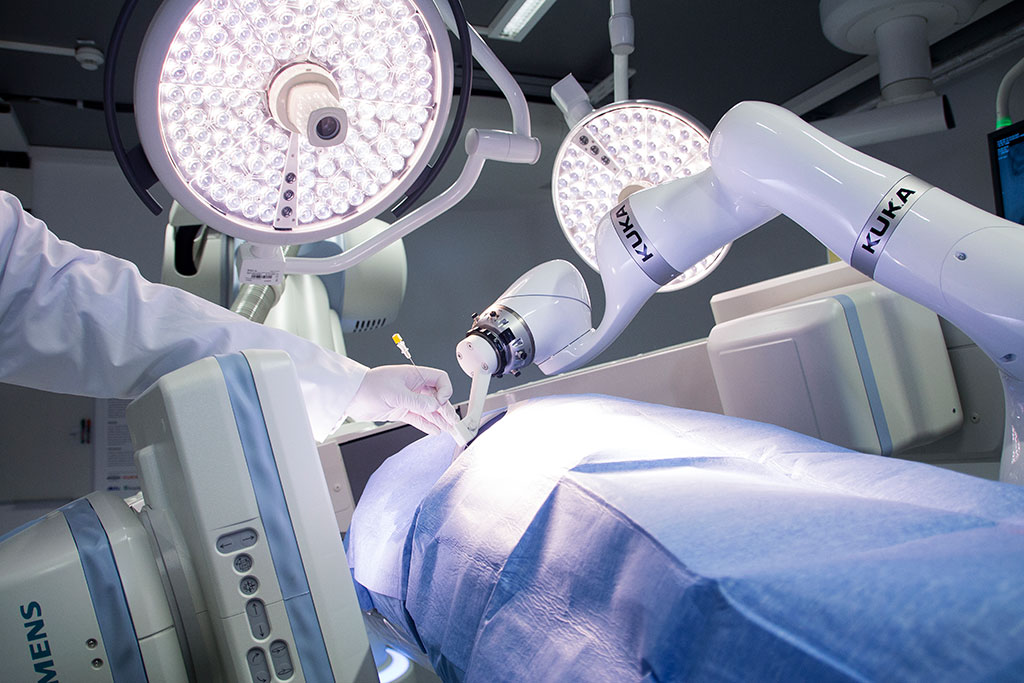 From robotic surgery and therapy applications to laboratory robots sorting blood samples and undertaking testing procedures, robotic utilisation within the MedTech sectors is on the increase across a broad range of applications, some of which, when undertaken manually, can be time consuming, monotonous even and also present opportunities for errors to occur.

Workflows in hospitals and laboratories can be simplified by automation, reducing the workload of personnel and ensuring their safety, as well as the safety of the materials being handled in scenarios such as clinical analysis, surgery or even rehabilitative therapy, a process that requires the physical interaction of personnel with patients; lifting, bending, moving etc. Though distinctions should be made between the different fields of applications:

The use of robotics and automation within the medical and pharmaceutical sectors is broad, as detailed above, and in order to provide as comprehensive an overview as to what exactly can be achieved and delivered through the implementation of robotic process automation, we should examine all areas in which benefits can be afforded.

When we talk about robots and robotics, many envisage an industrial machine, employed to undertake tasks within an industrial environment; palletising in a warehouse, press tending in a factory, automated welding in a fabrication facility – ‘traditional’ applications that utilise mechanized programmable tools, such as robots. The medical and pharmaceutical/life science sectors conjure a completely different setting in one’s mind, of cleanliness, hygiene, sterility and sanitation, the exact converse of those environments in which we would naturally assume that a robot would operate. But there are models of robots and applications that exist solely for use within the MedTech sectors and this wide range of high-tech products and solutions have been used extensively, for as long as the last 30 years, from robot-based assistance systems to assistive components. The evolution of MedTech technology means that today, aside from those pre-existing applications that are still used to this day, robots and components are now supplementing a wide range of medical technology applications, such as: minimal invasive surgery, bone surgery, non-contact bone cutting and orthopaedic surgery, aesthetic surgery such as hair transplant procedures, monitoring and sorting blood samples and undertaking tests and experiments that could take human researchers months to complete – essentially making a complex process, or sequence of processes autonomous. 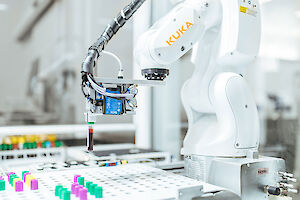 The age of medical robotics has only just begun. Sensitive and collaborative robots, in particular, will play a defining role in the future of robotics in medicine, and have already proved themselves in several ground-breaking applications. Consider the autonomous ‘robot scientist’. The Royal Society of Chemistry, based out of Liverpool University, developed a robot scientist, consisting of a KMR (KUKA mobile robot) a flexible and autonomous navigation platform equipped with an LBR iiwa sensitive robot arm. The robot scientist was instrumental in maintaining vital research and development processes during a time when social distancing measures prevented developers from working on premise. The development of the robot has been hailed as ‘a new digital age for science’ by the organisation, as the robot continued to operate throughout lockdown, undertaking a series of tests on the behaviour of solar cells.

Dr. Benjamin Burger, one of the developers at the University said the robot had transformed the speed at which he could carry out research. “It can easily go through thousands of samples, so it frees up my time to focus on innovation and new solutions.”

The university hospital in Aalborg, Denmark uses a system of lab robots and intelligent transport boxes to automatically monitor and sort blood samples. Up to 3,000 blood samples arrive in the lab there every day. They must be tested and sorted – a time-consuming and monotonous process which was undertaken manually until now. The pick-and-place application reduces the workload for hospital personnel and gives them time to attend valuable tasks.

“We wanted to automate this process to ease the burden on our employees,” explains Annebirthe Bo Hansen, Department Head at Aalborg University Hospital.

Robotics in MedTech had never been about dehumanizing processes, but about improving quality, safety, and access. The ever-evolving global demographic shift dictates that existing services are going to continue to struggle under the strain.

Current advances are great, but the use of a robot system remains entirely dependent on its acceptance by physicians and patients alike. It is the doctor who, ultimately, decides what the robot does and who has control over the entire medical application. Young doctors, in particular, demonstrate a great willingness to work with such systems. With regard to patients, however, more educational work is required. The challenge today, therefore, requires a delicate transition and combination of tradition and modernity to ease the minds of those new to these exciting applications.

Trains get a lift with Eaton