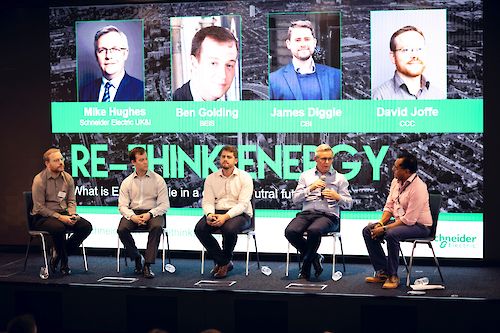 Whilst other forms of waste such as plastics, fast fashion and food are highly visible, energy is frequently overlooked. A Schneider Electric commissioned study of 2,000 UK adults and over 600 UK businesses revealed that just 10 per cent of consumers want to do more to curb their current energy use, while 74 per cent believe they already do enough.

In the same report, 68 per cent of business leaders reported their organisations wasted energy, particularly in the form of inefficient building and office space. Under half of company chiefs also shared their organisation had not implemented any measures aimed at tackling these inefficiencies in 2018.  Schneider Electric’s full report will be released later this summer.

Quotes from the discussion:

“We need to bring energy front of mind.  The market needs to take an activist approach to advocate for and instil efficiency and build an investment mindset if we are to achieve the 2050 net zero goal.”

“HM Treasury recently suggested it could cost the UK around £1 trillion to achieve carbon neutrality by 2050, but it’s not about cost, it’s about huge savings. Sustainability is a cost that pays for itself and technology and innovation will be key to meeting the energy efficiency challenge.”

“How do you encourage people to change their behaviour? 1) give people enough information to make decisions, 2) make it a desirable (almost competitive) thing to do, 3) enable people to take action”

“Much of the problem with energy efficiency is measurement, you need to know how the measures you have put in place are performing.”

“There is a huge appetite for change from businesses, not just driven by reputation, but also by future business stability.”

“Businesses can also change the way they operate, setting carbon reduction and sustainability targets and prioritising how they use their energy.”

“Businesses must give consumers the opportunity to change culturally in terms of how they address sustainability.”

“Businesses need to change the way they operate, and energy management needs to be much higher up the agenda.”

“We’ve always needed to get to net zero. The question has always been when, not if.”

“We need an investment of £22/23 billion in business energy efficiency by 2030 to help deliver climate change. If we deliver that, we could wipe £6 billion off business energy costs in 2030.”

“UK emissions have already fallen by 40 percent since 1990, while the economy has grown by over 70 per cent.  We’ve accepted the challenge to act on climate change. The government can help to make it easier and simpler for UK businesses to change, building on successes, for example, in making renewables and electric vehicles cheaper.”

“UK emissions have already fallen by 40 percent since 2014.  It will get better, and we’ve accepted the challenge to act on climate change. The government can help to make it easier and simpler for UK businesses to change for example, by making renewables and electric vehicles cheaper.”