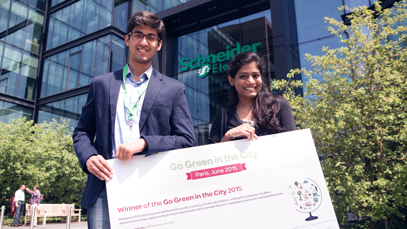 Schneider Electric, the global specialist in energy management and automation, has selected 100 teams for the semi-finals of its sixth annual edition of Go Green in the City student competition. Launched in 2011, Go Green in the City provides business and engineering students (second-year undergraduate or higher) with a powerful opportunity to showcase innovative energy management ideas for smarter cities.

As in previous years, participants must devise a viable energy management solution to one of the critical challenges faced by growing cities, applying to homes, universities, the retail sector, hospitals or water supply. The students submit their proposals as part of a two-person team with at least one female member.

Interest in Go Green in the City has increased massively since the challenge was first launched in 2011. In 2016, Schneider Electric received more than 16,400 registrations for the competition, up from 12,800 in 2015.

Submissions for the 2016 challenge came from students across the globe, especially in China, East Asia, India and North America. Among the 16,400 registrations, 1183 teams from 182 countries were shortlisted for the top 100.

“Go Green in the City resonates strongly with students because of growing concern about the effects of urbanisation, climate change and resource scarcity,” said Melissa Golden, Schneider Electric’s director for Global Talent Acquisition Programs. “Young people are genuinely interested in making a difference to the world’s future.”

The 100 semi-finalist teams announced on May 16 will work closely with a Schneider Electric mentor to develop their ideas into a business case, focusing on implications, user needs, viability and return on investment.