“If I were you, I wouldn’t start from here” is the punchline of a well-known joke about a hapless man asking for directions from a less-than-helpful passer-by. It’s a conundrum that frequently faces production teams with the ambition of automating their workflows to Industry 4.0-ready standards. 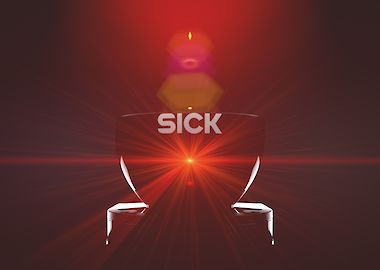 All too often, fixed legacy infrastructure and buildings create a bewildering barrier to rethinking conventional linear production processes.  However, the growing use of Automated Guided Vehicles and Carts offers the prospect of introducing more flexible materials handling, while dispensing with costly and non-value-added manual handling tasks.

“Everyone is talking about AGVs at the moment,” says Dan Evans, Research and Development Manager at MasterMover.  “Nearly everywhere we go, our customers ask us how we are developing our capability in this area.”

It’s not surprising: MasterMover has a 20-year pedigree in designing and manufacturing safe and efficient electric tugs that take the effort and danger out of moving wheeled loads, around every kind of production and logistics environment. So, it is a company that most certainly is starting from the right place when it comes to designing AGVs.

“Our experience of designing, manufacturing and servicing 1000s of machines that move and steer heavy loads safely is just second nature,” says Evans. “We’re also used to understanding and interpreting our customers’ production environments and workflows as part of that design process.

“That puts us in a different position to, let’s say, a team of software engineers who come at designing an AGV from a completely different perspective.”

As a result, MasterMover chose the heavier weight market starting at 2 tonnes as the focus for its first AGV development project.  Based on feedback from customers, they introduced an AGV design that could switch between AGV and pedestrian mode.

“All of our machines are built as pedestrian-operated tugs,” Evans continues. “Our first AGV is no different – it’s almost like an optional upgrade to a standard machine. So, if our customers want to change the AGV’s route temporarily, maybe just for a couple of days, while they do some building work, for example, they don’t need us to come in, or learn how to programme the AGVs themselves, they can just reallocate some resource and pull down the tiller for a few days. Then, go back to AGV mode when it’s all sorted.”

Now fully developed and available, the MasterMover AGV 300 Tow can carry loads up to 3,000 kg.  It is ideal for towing kitting trollies for lineside deliveries, enabling movements of loads to be automated without the need for expensive fixed infrastructure.  MasterMover’s AGV model offers customers the opportunity to start with a sole, entry-level AGV with on-board intelligence, right up to a centralised fleet management solution for multiple AGVs managed centrally over WiFi.

MasterMover has always insisted on keeping its design and development talent in-house, with a dedicated team based at the company’s manufacturing headquarters in Ashbourne, Derbyshire, and many solutions are designed and built to individual customer specifications.

When it came to developing a new AGV, it was safety that was the unequivocal starting point for the team, stresses Evans.  MasterMover turned to SICK’s safety laser scanners and its Flexi Soft Safety Controller with EFI Pro Gateway (EtherNet/IPTM CIP SafetyTM) as the foundation for an integrated and standards-compliant safety design. 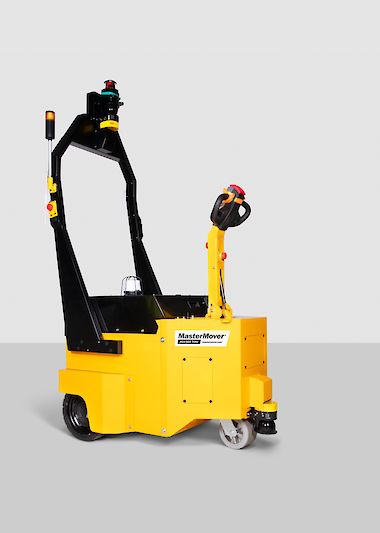 SICK Flexi Soft is a modular safety controller that allows applications to be developed according to their requirements and complexity.  The SICK EFI-pro Gateway is a safe protocol that runs over the standard Ethernet/IP bus system.  It can be used in applications requiring up to PLe (EN ISO 13849)/SIL3 (EN 62061).

“We come across the SICK name in almost every industry we work,” Evans continues. “So, we knew our customers would recognise industry-leading safety components onboard. An AGV is first and foremost a safety-driven product.  If you don’t get the safety right, then it’s unlikely to deliver the functionality you need.”

Using SICK’s Flexi Soft Safety Controller and SICK Safety Designer software provided an ecosystem for Evans and the R&D team to confidently integrate their own safety system. Each standard MasterMover AGV model will use two SICK microScan3 scanners that communicate via EFI Pro to the Flexi Soft controller. Together with SICK’s DFS60 safety encoders, and the SICK Drive Monitor FX3-MOC1, all of these products are integrated into an application achieving PLd (EN ISO 13849)/SIL2 (EN 62061).

SICK’s UK machinery safety product manager, Dr Martin Kidman, explains: “The complete MasterMover AGV system achieves a PLd/SIL2 due to safety laser scanner technology. The microScan3 scanners enable an exceptionally wide 275° wide scanning angle with a field range of up to nine metres and the field sets can be configured to support the changing vehicle paths as the AGV turns and changes direction.

“Based on the CIP Safety protocol, EFI-pro is SICK’s safety network for industrial automation. The SICK FX3-MOC Drive Monitor module and EFI Pro Gateway are the links that combine the SICK devices into a one system solution.

“The dual drives of the AGV system are safely monitored using the SICK safety encoders integrated directly into the FX3-MOC. This information is then used to dynamically change field sizes on the safety laser scanners via EFI Pro communication based on speed and direction.

“SICK Flexi Soft allows the application of complex algorithms and logic so that the AGVs can be configured to work completely independently. If the safety laser scanner detects an obstruction in its warning fields, the safety controller instructs the vehicle control system to slow down and then speed up again once the field is clear, allowing efficient and productive operation.

“If the inner protective field is breached, the Flexi Soft ensures that all drives are stopped immediately and are prevented from starting up again until it is safe to do so. The Drive Monitor can also safely detect standstill allowing a safe stop rather than complete emergency stop. If risk assessment allows, auto-restart can also be enabled preventing possibly hours of an AGV sat waiting for a manual reset.”

By using the SICK Flexi Soft safety controller with EFI Pro Gateway as the basis for safe communication on the vehicle, there was no need for MasterMover to engineer multiple connections between devices. One standard Ethernet cable is needed per scanner for the EFI Pro Interface and, by creating safe communication between encoders, controller and scanners, one holistic design was possible.  The alternative would have been many separate connections, field switching signals and safety relays, needing tens of cables in a core and taking up a lot of space. 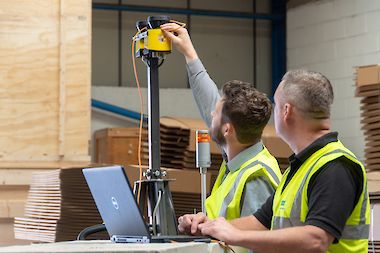 Evans continues: “We offer a full range of AGV navigation options and try to encourage our customers along the line of what we call “natural navigation” using a laser scanner. It’s more flexible, as you don’t need to have fixed infrastructure such as tape, RFID tags or barcodes, which can impact on reliability.

“The AGV navigation we are using can tolerate a fair amount of change in the environment. So, for example, forklifts or heavy foot traffic can walk around the AGV quite comfortably. If you have a distribution scenario, where you have got pallets moving around and changing position, and you have got unpredictable objects in the path, we can navigate around that with technology we are using.” MasterMover works with each customer environment to support a full safety risk assessment.

Using the AGV for line side delivery also offers the prospect of working in tandem with the MasterMover PS AGV. With a load capacity of up to 30,000 kg, the PS AGV can be used for pulsed production line automation as an alternative to a conveyor.  Using the AGVs together offers a complete alternative to conventional, fixed linear production, says Evans.

“Compared to a conveyor system, the cost is reduced significantly, and the production flexibility is increased substantially.   At the same time, redeploying operators from non-value-added work, and increasing the weight each AGV can pull, means you can expect good returns on investment.

“That said, for most people it’s about starting the ball rolling. So, our customers can work with us to upgrade just one key process to begin with.  Because they are making the least number of changes to the facility, it’s very scalable.”

The prospect of incorporating certified safety outdoors for the AGV is also the subject of further important development between MasterMover and SICK.  Upgrades to the AGV under consideration include incorporating SICK’s new outdoorScan3 safety laser scanner. The outdoorScan3 is a class D device according to IEC TS 62998, the new technical specification governing outdoor use.

“For machine builders and integrators like MasterMover, the SICK Flexi Soft system is a good ecosystem,” concludes Evans. “Its modular structure and the ease of set up of the microScan3, has helped us to speed up our development process. Because the scanners, controller and software were all from SICK, we did not have to piece together a safety system from a whole range of different suppliers.

“We have perfected our first AGV design and now have a clear roadmap of where we are going with future vehicles to complement our entire product range.”