Metal detectors and x-ray machines may fall into the food inspection camp, yet both are very different technologies. One uses a radio frequency transmit receive system, picking up anything that’s conductive or magnetic, the other is a density discriminator, using light frequency at high energy to pass through a product to identify mass.

Both have their pros and cons. Despite their higher price tag, x-ray machines are still considered by many as being more effective within the food inspection industry as ‘they see everything’. European Managing Director of Sparc Systems Phil Brown uses the glass of water test to scientifically explain the types of contaminants an x-ray might spot, and those contaminants it might not identify.

“An x-ray machine is a density detection system. Yet like any inspection system it does has limitations. As a simple test, place any contaminant you may want to identify in a glass of water. If it sinks like a stone, it’s probably going to be a detectable element.  If it takes its time or floats, it probably won’t be detected by an x-ray machine.”

“Wood, feathers, bugs – they’re probably the most common contaminants in the food industry, yet are undetectable with x-ray. Some metals are equally impossible to see, such as the very thin aluminium used in fizzy drink production. If you cut a can into three or four pieces, it’s likely none of these pieces will be detectable in an x-ray machine, either inside or on top of a food product.”

Phil confirms an x-ray will pick up the denser contaminants, such as stainless steel and ferrous, non-ferrous metals, but lighter ones, including magnesium and aluminium, and anything with a low density metal, will be difficult to detect. 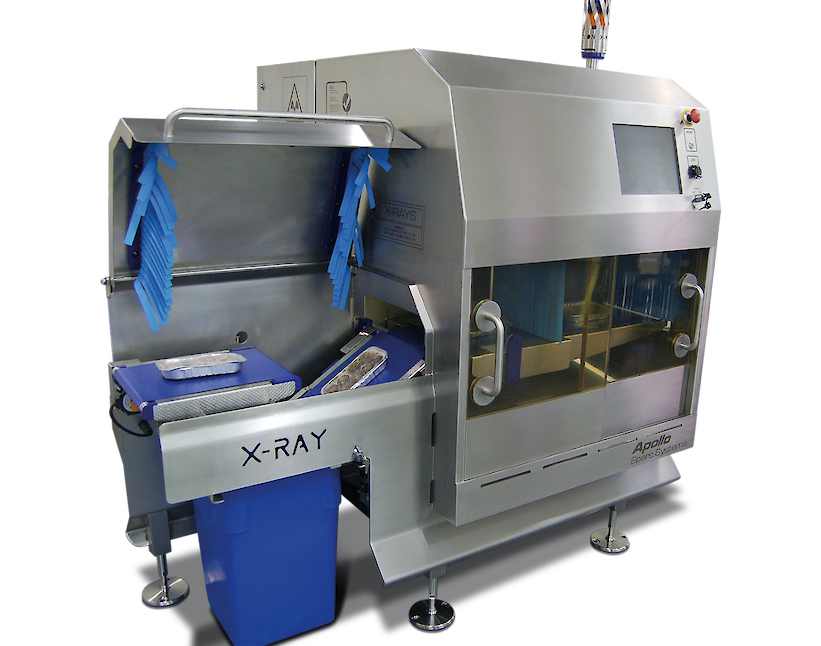 “These machines may even struggle to pick up some glass and rock if they come from low-density sources. So take the glass of water test – it’ll pretty much give you the same result you can expect from an x-ray.”

Phil concludes: “If you’re keen to replace a metal detector with an x-ray machine, be mindful you’ll lose virtually all detection of very low-density metals unless a large ‘chunk’ presents itself. I’ve seen cases where people replace their detectors only to find half an aluminium can has passed right through their x-ray, which is a bit of a surprise!

“Although this is a simple technology to understand – everyone can visualise a light patch and a beam passing through a food product, plus the machine gives a nice display of what it’s seeing – there’s a large misconception that an x-ray machine detects everything, which is simply not true.”

However, in plants where there is an additional risk of contamination from stone, glass, bone, rubber and plastic, then x-ray is a vital addition to operations. X-ray is also crucial for inspecting products in metallised packaging, for example cans, tins or foil.

Phil advocates x-ray machines should be a complimentary and secondary technology for businesses with specific needs. For instance, those where contaminants commonly used in specific types of food production do not detect well with a metal detector.

As specialists in food x-ray systems, Sparc machines feature a protective high-density acrylic window with magnetised sliding doors on its Apollo (x-ray) and Theia (x-ray and checkweigher combination systems). The result: operatives can literally see up to 200 packs per minute travelling through the system without compromising their personal safety as the x-ray beams are fully contained.