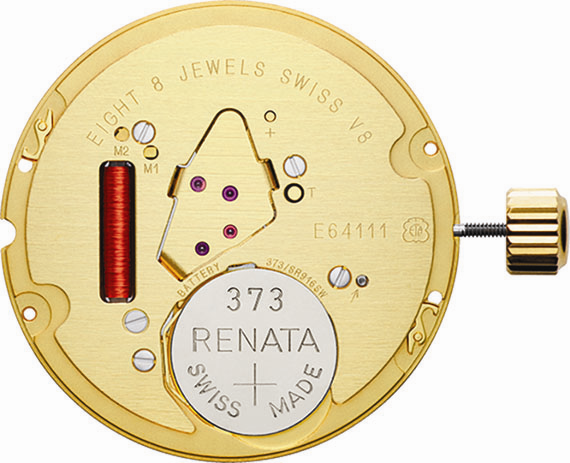 Since its launch at EMO 2011, the Tornos MultiSwiss 6×14 machine has proven popular in various sectors such as the automotive, medical and even the connectivity business where high volume production with flexibility is required. The success of the MultiSwiss has been based around the fact that it uses similar kinematics to their single spindle counterparts. It has been the productivity increases and floor space savings that have led to the MultiSwiss replacing single-spindle machines in many cases.
Thanks to its performance, the MultiSwiss has also been able to meet the needs of the most demanding and highly sophisticated markets, such as the watch making sector. ETA has chosen to entrust this machine with the manufacture of watch movement parts at its new production unit in Boncourt, Switzerland.
ETA, a Swiss company belonging to the Swatch Group, develops and produces movements for watch making. The quality of its mechanical parts and its quartz movements are known globally. ETA is one of the representatives of Swiss quality worldwide. The company employs several thousand members of staff based at more than 20 production sites. ETA also produces quartz movements, a large number of these components are produced on the site at Boncourt.
The management of the Swatch Group and ETA decided to create this site to centralise its high volume production, to establish a bastion of high quality quartz movements and to optimise logistics flows. But that was not all. Boncourt is also the production site for a high-tech movement, designed for the SWATCH SISTEM51. This movement is proof – if proof were necessary – of ETA’s place as a leader in technology. With the SISTEM51, ETA has challenged all the conventional principles of assembling a mechanical watch movement. The capacity for change and dynamic drive boasted by ETA and the other production companies in the Swatch Group means they are placed to bring such a high-volume mechanical movement to the market.
High-volume production
The quartz movement comprises between 80 and 100 parts and the number of components produced annually is in the millions. High-tech production equipment is therefore required to produce these parts. This is where multi-spindle technology comes in. ETA needed a compact machine that could efficiently handle large production runs with very tight tolerances. Following the test phase in Granges, where the performance of the MultiSwiss was assessed against that of the competition, ETA chose the MultiSwiss.
High volumes of complex parts
To produce high volumes of several types of components, ETA Boncourt uses MultiSwiss technology, which has proven to be ideal for this role. It effectively replaced several single-spindle machines and offers flexibility in quickly producing high volumes of parts. The components machined are particularly small, as Pierre-André Bühler, CEO of ETA explained: “When we compared the market, the MultiSwiss from Tornos was the only machine on the market to effectively use small bars”. Its hydrostatic technology delivers good finishes thanks to the damping effect of the hydrostatic bearing’s oil film.
Easy maintenance
The ergonomics of the MultiSwiss greatly facilitates its maintenance, as all the peripherals are integrated within the container. Maintenance is also simplified when it comes to software, as alerts can be configured according to the machine status and thresholds can be defined as required. Mechanically, the fact that all the peripherals form a single unit avoids interface problems; each peripheral is specifically designed for the machine.
The MultiSwiss has found a place on the market by turning the traditional product hierarchy on its head. The gamble has paid off. Tornos began delivering machines little over two years ago and it has already installed well over 100 machines. Every day the technology and precision are challenged at ETA and the MultiSwiss goes from strength to strength.

Component supplier gets a lift from vertical storage

Amphenol expands its distribution through AmazonSupply