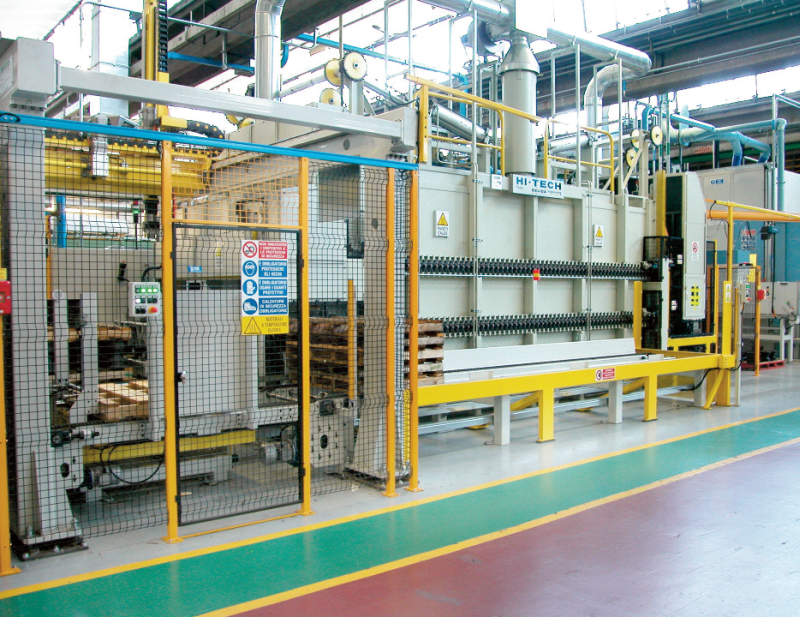 A new roller production line for Caterpillar, one of the biggest track loader companies in the world, has increased both productivity and operator safety

Anew roller production line has been put into action by Caterpillar, a global leader in cutting-edge technology and builders of earth moving equipment, construction and mining equipment, diesel and natural gas engines, and industrial gas turbines. Rollers are a fundamental track vehicle component currently made in Italy by a subsidiary company of one of the most important organisations operating in this market.

After a period of collaboration and partnership with the American HQ, the Italian company became part of the multinational Caterpillar group in 1993.

Today, this company plays an important role in the group, with over 340 employees working in three establishments, two located in the company’s residing region responding to the main headquarters near Bologna. The company is today a major world manufacturer of rollers for its parent company’s undercarriages. These rollers are essential components to earth moving machines exported worldwide.

These machines are usually considered as specialised tractors working in hostile terrain and conditions. In various European and other continental countries, these track-type tractors are associated to heavy industrial use and earthmoving machines. The history of these vehicle types starts way back in 1890 where two innovators invented and experimented separately with various forms of steam tractors for farming use, eventually joining together to establish what is now known to be the most important company of its genre with which the customer is a subsidiary.

The track models are built on: a tracked undercarriage comprised of front and rear idlers, conveyor track rollers, which balance the tractors weight evenly on ground, sprockets that drive and support the track and a frame which supports and joins all the working parts together. 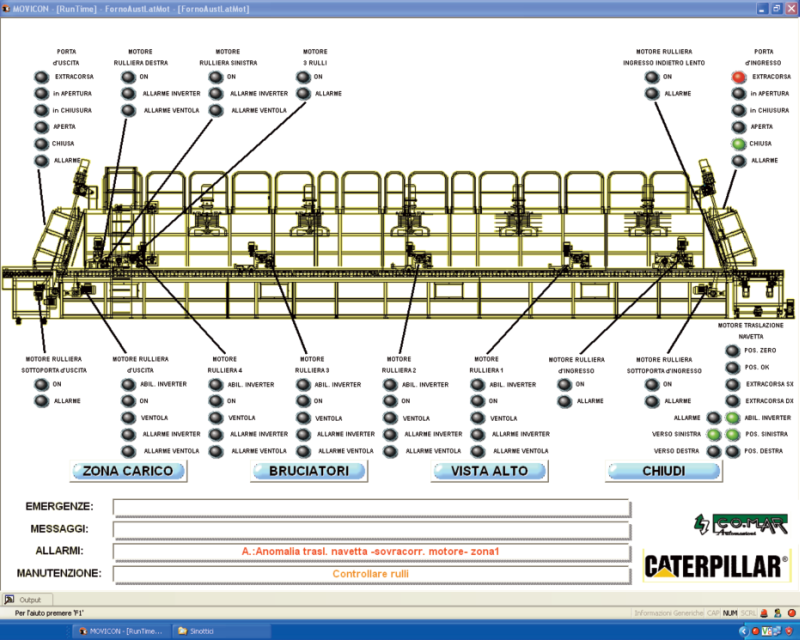 Strongly integrated and equipped with long term management strategies targeted towards continuous growth, the customer bases its own strategy on technological development and quality in collaboration with long standing partners CO.MAR Automation Srl. who for many years have been following the electrical and mechanical engineering and design for the Italian customer counterparts, providing top quality services for all their systems and production lines, whether based on CNC, PLC or Scada/HMI.

Recently, the customer entrusted CO.MAR with a mission to design and create a new line of heat treatment furnaces and baths for their roller production tempering process involving a number of different phases which included austenising and quenching to create a stronger end product. This project was designed on new technology to also include a new palletisation process at the final stage especially designed to help increase production while guaranteeing maximum quality and safety for workers in hazardous environments. The automated production line come complete with a tempering process involving various heat treatment furnaces, one for annealing, one for austenising, one for the tempering process used for the final heat treatment and three baths for the inbetween quenching process of the austenised pieces. This is followed by the final stage where a programmed controlled robot is used for the palletisation stage to unload, and store finished pieces transported through on the conveyor. The first step is the austenising process involving an annealing furnace which heats the metal to obtain a uniform solid structure with complete solubilisation of the Cementite (iron carbide) to improve and reinforce both steel roller resistance and endurance.

This is followed by the quenching process where three banks have been provided to shunt through more pieces quicker into the first available bath to increase the plant’s productive capacity and protect their quality which may diminish if exposed too long in open air. The baths carry out a repeated process of cooling and tempering by reheating the pieces at specific temperature ranges until the metal reaches the perfect hardness suited for the rollers’ purpose. Once this process is completed, the pieces continue on to the tempering furnace for the final process where they are reheated to a temperature lower than the one used in the quenching stage. Once this temperature has been reached the pieces are then slowly cooled down with temperatures gradually lowered until completely cooled to ensure that tension is reduced within the metal without altering its hardness. When finished the pieces are then ready for palletisation by being stacked onto pallets and stored appropriately and ready for the next procedures. 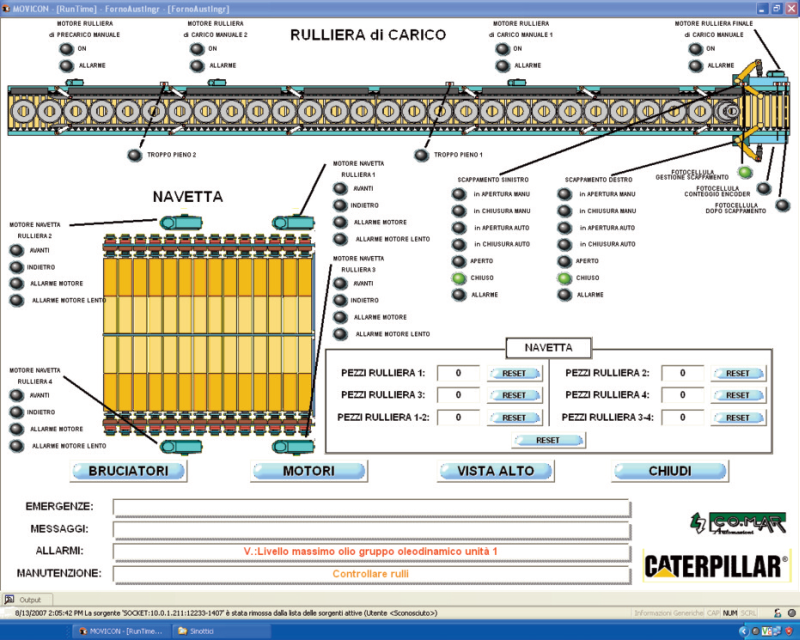 The solution used for managing the tempering process line consists of a centralised supervision system based on Movicon which is localised in control workstations in the production management offices. A 50in maxi plasma display screen is connected to a supervisory PC and positioned in full view at the beginning of the production line.

This maxi-screen is managed by a second XVGA video card installed on the PC. The Movicon supervision system consents screen pages to be displayed and opened on the local monitor or on the second monitor being the maxiscreen.

By using the appropriate functions, the supervisor shows a screen layout, purposely designed to display the production line’s main parameters and working statuses. This screen gives maximum visibility of the system’s realtime situation keeping workers fully updated and aware of what’s happening at all times. Three other workstations have been dislocated along the production line, each with a 10in touch screen operator panel based on Windows CE. Thanks to the Movicon technology, design engineers were able to use the same software for both HMI panels based on Windows CE and for the centralised Scada system based on WinXP.

This meant they were able to get maximum data integration without spending too much time developing.

For instance, production recipes are centralized and controlled in the main supervisor station where they are stored in archives but can easily be activated and managed locally from any one of the workstations. All workstation terminals have access through Ethernet to all the Simatic S7-300 PLCs dislocated throughout the production line to control the whole tempering process with automated furnaces and handling logistics system. The palletisation system, based on Sinumerik 810D, is also connected in net to the supervision system.

Thanks to using new technology and Movicon, workers are now better aided in managing production processes with simple, intuitive screens clearly illustrating all process phases. They can also view all process information from any local display unit. Control operativity can be enabled or disabled by the central supervisor, with auto-activation if supervisor should expectedly or unexpectedly shut down. In addition to the transparent and intuitive operator interfaces, production recipes, centralised in the supervision system, can be selected or activated locally. Files can therefore be managed locally but kept centralised, resulting very beneficial to management, backup and control purposes. Being able to have production recipes and file storage centralised is one of the great advantages offered by Movicon by using the many features to manage both touch screen operator panel projects (Windows CE) and central supervisory projects. Consequently, this leads to added project planning bonuses when having to deal with data integration and network connectivity to local control panels that only need to have information availability of local connected devices and not of the entire production line. The production line in its entirety is managed by the central supervisory, based on a PC with Windows XP dislocated in the production manager control room. A general layout of the entire production line can be viewed from this room with detailed ongoing operating situations of each control station and substation, along with general production information and statistics. Workers can control the whole production process and access data files of the various production control stations from the central control station. 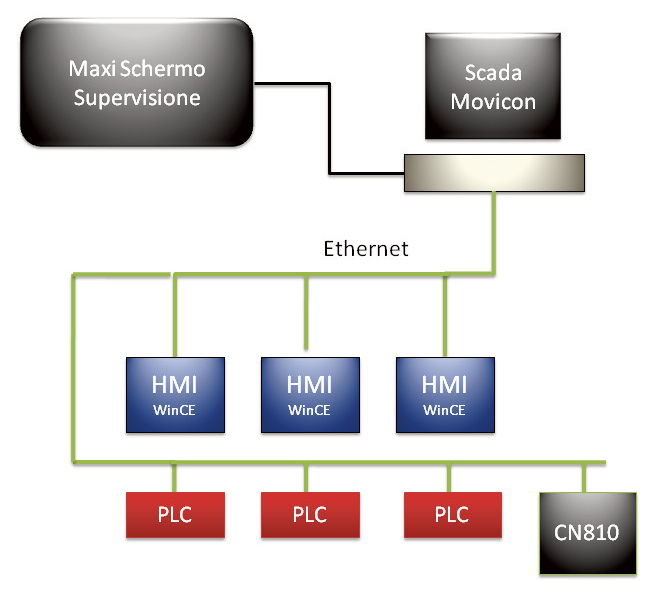 Production recipes can be automatically activated directly from the central supervisory and from each local station, according to product type to be manufactured. Main information on system alarms and working states are also displayed on the hi-definition 50in plasma monitor panel situated at the beginning of the production line.

This panel, connected and configured as a second PC monitor, independently displays information in separate purpose-built Movicon project screens. Therefore, workers can feel free to move around while still keeping an eye on the production line working parameters. In addition to the general alarms and those filtered for each area, the central supervision system also manages programmed maintenance, alerting users when to intervene on critical situations with preventive maintenance methodologies designed to avoid undesired downtimes and promote productivity improvement. Special servicing pages can be accessed using login procedures to allow maintenance workers to configure and monitor all the vital automation system parameters.

Both local maintenance workers and technical staff, responsible for engineering the project, can access these pages by remote control using modem connections to get easy and clear maintenance procedure guidance.

All production data is collected and recorded with the option to trace by quality and quantity. Data is archived in relational Databases at general and local levels, where data is recorded in files in .CSV format so that historicals can be stored locally and independently from the central supervisor.

Thanks to historical log traceability, production managers can get all the information they need relating to each production process run with analysis filtered by product, batch, shift, and worker. In addition, any system maintenance activity that occurred during each run can also be traced.

Production line alarms, displayed and managed to help workers restore working states, are also recorded in the appropriate archive files for obtaining future historical analysis and statistics of the most frequent downtimes with the longest durations.

The new roller tempering process production line went into action much quicker than expected to the great satisfaction of the company directors, who are now planning to implement the same architecture in other production lines. CO.MAR has been operating in the industrial automation market since the mid 80s by engineering and realising advanced solutions for industrial automation tailored to any product sector need.

Hallmarked by constant use of evolutional technology and standing headstrong in experience matured from numerous alliances with leading companies in their sector, CO.MAR are the ideal partners for satisfying every need with quick delivery. The CO.MAR activities are carried out in total synergy with Sestante, company group partners in mechanical engineering and design.

Smart Factories and the future of manufacturing