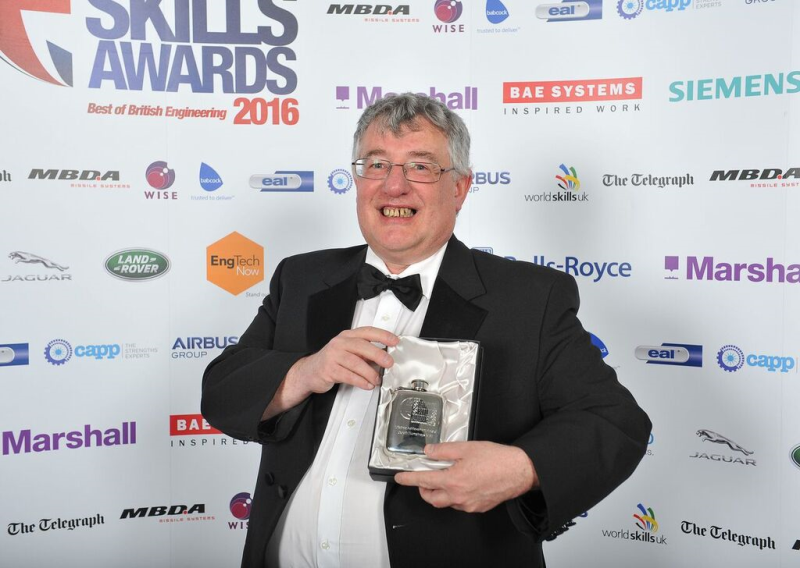 An engineer dubbed by his company as the father of apprentices has picked up a Lifetime Achievement award as he prepares to retire.

Gareth Humphreys of MBDA Missile Systems, based at Lostock, Bolton was honoured at the Semta Skills Awards at London’s Hilton Hotel on Park Lane last night during a gala dinner hosted by BBC journalist, presenter and engineering advocate Steph McGovern.

He was presented with the specially-created Lifetime Achievement Award by Ann Watson, CEO of Semta and Julia Chippendale, managing director of EAL, who described him as the “unsung hero of UK engineering and manufacturing” as he took to the stage to a standing ovation from the audience of industrialists, major engineering companies, graduates and apprentices.

“I am really shocked and had no idea at all,” said Gareth. “The highest moment for me is when you offer a young person a job and hear them scream down the phone or you bring them in and see their face – that’s what it is all about.”

Gareth Humphreys began his working life in 1975 as an electrical craft apprentice and has been the apprentice training manager at MBDA since 1992. He has won numerous company awards for Young People Development and in return his charges have helped MBDA to over 150 national and regional awards and 51 company awards for training and skills.

Gareth received an MBE in 2004 for the work done to foster strong links between educational establishments, young people and engineering companies and gained an Honorary Masters Degree from Hertfordshire University in 2008.

“If a young person is going to do well you have to give them an opportunity to excel,” said Gareth. “Engineering is on the up, we are seeing more diversity with women coming in and there is a recognition of the importance of engineering to the UK. I think there is a lot more to do such as changing mindsets with teachers, parents and even some ministers.”

Chippendale said: “Gareth lives and breathes skills training, apprenticeships and young people’s progression and swears by the saying ‘the best people to promote engineering and manufacturing to young people are young people themselves’.

“Skills development has been a part of not only his career but his hobbies as well. Gareth has supported WorldSkills as an expert and Chief expert, has been judge and chief judge for UK Skills, WorldSkills and the international skills Olympics, travelling to many countries including Taiwan, Canada and Japan to be a part of it.

“Certainly we at Semta and EAL truly value the immense contribution Gareth has made and the support he has given to us but most importantly to the young people he cares so passionately about.”

Hundreds of nominations from across the UK for the nine categories were shortlisted to leave 27 finalists battling it out in the prestigious Semta Skills Awards. The awards were judged by an expert industry led judging panel. Details of all the other winners their awards log on to www.semta.org.uk/skillsawards

Application of the manual lift tables in manufacturing industries