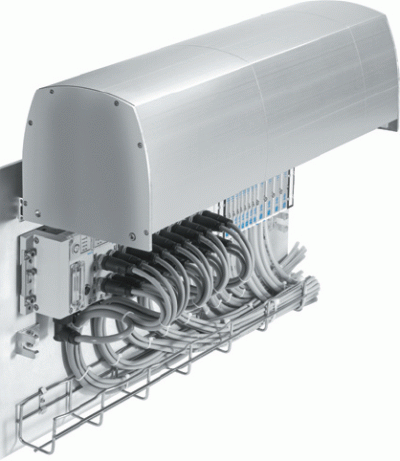 Festo has reduced the cost of installing its valve terminals with its protective hood that can eliminate the need for a control cabinet. The CAFC hood fits directly over the valve terminal and occupies minimal space, making it a cost-effective and elegant alternative to cumbersome cabinets.

Most automation designers house the system’s valve terminal and constituent control modules in some form of protective cabinet. However, conventional cabinets often take up more space than is required. By creating a small, self-contained protective hood for its valve terminals, Festo has overcome this problem. Fabricated from low cost aluminium and designed for minimal material usage, the hood saves up to 50 per cent of the space and 70 per cent of the cost of a standard control cabinet.

The CAFC hood is suitable for use with any Festo valve terminal, including the company’s CPX multifunctional automation platform. It provides a high degree of protection against the ingress of contaminants such as dust, water droplets and foreign particles while guarding against impact damage and helping to prevent anyone tampering with connections or settings. Typical applications include assembly and packaging machines, and process control systems.

THE SENSOLUTION: The smallest photoelectric sensors in the world