KARL STORZ in Widnau, Switzerland, has been producing eyepiece cups for endoscopes automatically since the summer of 2021. A KR AGILUS has since relieved the team – and accelerated production. A Swabian-Swiss success story.

“We had a welding machine that was getting on in years and unfortunately no longer worked very reliably. ” This is how Sarah Mühleck, site manager of the KARL STORZ branch in Widnau/Switzerland, describes the reason for the automation. That was at the end of 2020, so her team set out to find an efficient, innovative solution. KARL STORZ, founded in 1945, stands for endoscopes, medical instruments and equipment of the highest quality. Around 8,300 employees worldwide are responsible for the development, production, sales and service of its 15,000 products. The company headquarters are located in Tuttlingen in Württemberg, and production also takes place in the USA, Estonia and Switzerland. Not far from Lake Constance, in Widnau, optical components for endoscopes such as eyepieces are produced, which enable a view inside the body and therefore have to be extremely tight and cleanable. 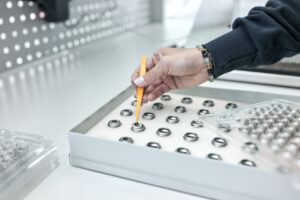 The specific process for which the new welding system was required consisted of joining a stainless steel sleeve with the cover glass set in a stainless steel ring. Both are part of the so-called eyepiece cup of the endoscope. This allows the surgeon a clear view into hollow organs or body cavities during endoscopic procedures. Manual labor was indispensable for this. Employees inserted the components into the machine and removed them again after the welding process – always a sleeve and a ring with cover glass to be welded on top. “We are gradually taking such monotonous, repetitive, stressful tasks away from our employees,” notes Sarah Mühleck. The team in Widnau specifically looked for an automation solution. As far as the actual welding process was concerned, the favored system had already been determined: The KARL STORZ company had already been testing the TruLaser Station 7000 3D laser welding system from TRUMPF in Ditzingen, Swabia, for several months and was very satisfied with it.

Step two: Recommendation in the neighborhood

TRUMPF, founded in 1923, is internationally successful with its laser and system technology and now also with automatable solutions. One focus is on laser cutting, welding and marking. 15,000 people work for TRUMPF, and the cooperation with KARL STORZ has proven itself for almost 30 years. When automation of the TruLaser Station 7000 came up, the TRUMPF team was able to recommend an integrator – conveniently located nearby as well. The company wbt automation in Gosheim currently employs 18 people. The managing director of wbt, Joachim Burkert, was quickly taken with the idea of partially automating eyecup production. “After all, the name wbt also stands for ‘We move parts’, so we were happy to get involved,” he says looking back. “Even though the requirements were high.” 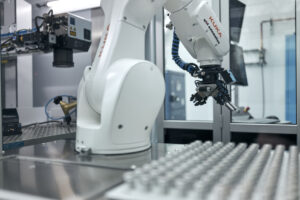 Joachim Burkert specifies: “We had to accommodate a very large number of workpieces in a very small space, with a small robot in a compact cell, and position and deposit them precisely in the welding unit. In addition, we had to coordinate with each other how exactly the robot would transport the parts, since we wanted to grab two workpieces with each movement and join them.” For about 98 percent of its automation projects, wbt automation relies on KUKA robots, Burkert reports. “The accuracy required for this demanded a precisely measured robot, not an off-the-shelf one. We chose a KR AGILUS of type KR10 R1100, which was sent to KUKA for extra training before it came to us.” Now, among other things, it can check the position of the components with its laser sensor system and, in addition to the quadruple gripper, also use a small vacuum bellows to position each cover glass precisely.

The robotic cell is docked to the TruLaser Station 7000, but can be flexibly removed and serviced. Its workpiece storage contains four drawers that can hold a total of up to 960 workpieces. The KR AGILUS uses them to transport the components to the laser station – two sleeves per welding process and the cover glasses placed precisely on them. The finished welded eyepiece shells are also returned to the workpiece storage system.

Joachim Burkert reports that the KUKA robot had the best technical prerequisites: “We married the proven KUKA controller and the familiar operator panel with components from our company. The robot was mounted on a cell specially developed for it, the MRC flextray. Via Profibus, we established a secure connection with our Siemens controller, which enabled us to communicate with the TRUMPF system without any problems.” 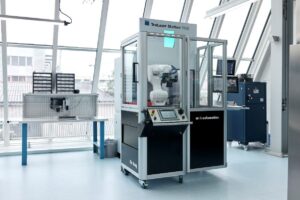 The KR AGILUS transports the components into the TruLaser station and out of it again after welding. Previously, this was manual work. (© Stefan Hobmaier, TRUMPF)

Wolfgang Karl, who has been with KARL STORZ for forty years and is the company’s laser specialist, admits to being skeptical at first. “I had questions, of course. How does the robot grip the parts, how safe is it? What if, due to a mistake, the gripper sometimes only inserts one part but is supposed to transport two outside with it? And how do we get it to work 100 percent so that there are no problems?” As an answer, wbt automation provided “a complete simulation in advance, which we ran with the simulation software KUKA.Sim,” as Joachim Burkert describes. With the help of the digital twin, the integrator was able to “show the whole product even before the hardware was there,” says Burkert. “That cleared up my doubts,” emphasizes Wolfgang Karl. In combination with the right laser – in this case a fiber-based TruFiber 500 with 500 watts – automated production began.

Finally, only the employees had to be convinced, who now no longer had to load and unload welding machines, but instead, among other things, fill the drawers, operate the robot and take over quality control. Sarah Mühleck reports: “No one was laid off; in fact, we were able to compensate for a retirement with automation. But some employees had doubts about whether they were up to the new technology.” The company wbt trained KARL STORZ employees in both Tuttlingen and Widnau and took away their uncertainty. Sarah Mühleck’s assessment after just over half a year: “Every employee can operate the robot and this station is even particularly popular in our rotating system.” 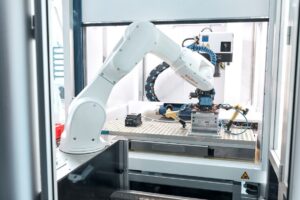 Six months after the first meeting of all the players, the TruLaser Station 7000 with KR AGILUS robotic cell went into service in Widnau. With measurable success: For loading and unloading, which takes an average of ten seconds in manual work, the robot needs two seconds. But the most important thing, according to Sarah Mühleck, is: “The quality is right. The weld seams are very, very good. And the system is reliable, nothing falls out.”

Dr. Axel Frey, Product Manager at TRUMPF, is also impressed by this automation project. “Putting parts in and taking them out of a laser welding system, and doing so with the highest process reliability – that’s something that an employee can do, but first of all not at this speed and secondly not 100 percent consistently. But the process must be constant over 24/7 and the quality must remain high.” With the TruLaser Station 7000 in Widnau, that succeeds, he says. What’s more: “The project has also received very positive feedback from medical technicians from the USA, to whom I presented it. This automation is a lighthouse project in many respects.” 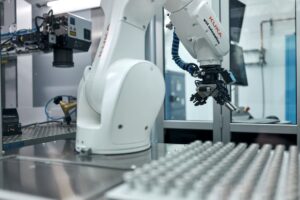 For Joachim Burkert, the fact that the laser welding system and the robot can be quickly separated at any time makes the solution particularly promising for the future. “If KARL STORZ has another task for the robot in five years, the employees can undock the cell in less than a minute and assign the new task to the KR AGILUS. Or you can assign one KR AGILUS to two different lasers: during the day it works on laser one, at night on laser two.” Currently, however, no one at KARL STORZ in Widnau wants to change anything. Everyone is happy with the way people, machines and the KUKA robot are doing their jobs. “It was,” site manager Sarah Mühleck sums up, “a really good collaboration. It makes me want to repeat something like this.”

“Any employee can operate the KUKA robot, and this station is actually particularly popular in our rotating system.”

KUKA is a global automation corporation with sales of around 3.3 billion euro and roughly 14,000 employees. The company is headquartered in Augsburg, Germany. As one of the world’s leading suppliers of intelligent automation solutions, KUKA offers customers everything they need from a single source: from robots and cells to fully automated systems and their networking in markets such as automotive, electronics, metal & plastic, consumer goods, e-commerce/retail and healthcare. 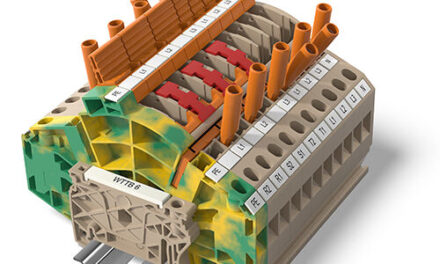 Save space and create an elegant solution with X2 Control