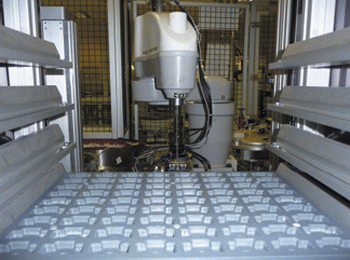 TM Robotics (Europe), the European robot partner of Toshiba Machine, has announced new controller technology which makes the addition of a sliding fifth axis to its SCARA robots easier than before. End users will be able to extend the range of a SCARA robot or use the modified machine to transfer product from one workstation to another without human intervention or any non-robot automation technologies.

At the heart of the new functionality is Toshiba Machine’s new TS3000 controller, which features a built-in Ethernet port, making robot, conveyor and vision synchronisation simple. This added connectivity allows the addition of a fifth axis to a SCARA robot, in the form of a Cartesian linear slide, creating an additional axis of movement or fully synchronised, axis which can be precisely tracked by the SCARA’s (tool holding) z-axis.

Thanks to the Ethernet connectivity of the controller, the additional fifth axis, as well as other robots in the same cell, can share vision via the TS3000 itself. With fewer cameras costs of implementing vision technology are reduced.

Temperature controlled logistics returns with a top schedule for 2019

Letter to the editor: No use trying to turn the tide of Windows