How robots could help sustain the UK’s manufacturing growth 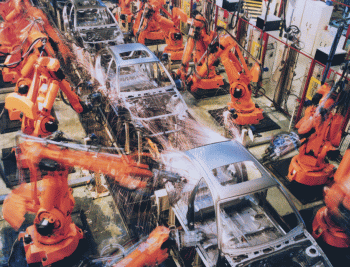 The economic problems of the past two years have led many people to question whether it’s time to return attention to the UK’s manufacturing sector as a way of achieving a more balanced economy. Nigel Platt, sales & marketing manager for ABB Robotics, reveals how robots could provide the all-important competitive advantage for UK manufacturers

As a supplier of automation equipment for manufacturing processes, I’ve been delighted to see the upturn that has so far happened in the UK manufacturing sector. The latest set of figures from the UK’s Office for National Statistics (ONS)* shows an overall 4.3 per cent increase in the sector’s output to May 2010 compared with the same period last year, representing one of its strongest performances for several years.

The challenge now is to make sure that the growth that has been achieved continues to be sustained and built on.

Modern robotic technology offers a great way of doing this. Over the past 20 years, robot capabilities have evolved massively. Performance, especially in the areas of precision and repeatability, is now vastly improved. Robots are also much simpler to operate, making them far more suitable for universal application. Most importantly, they’ve become increasingly affordable, opening up new opportunities in sectors where they might previously have been regarded as prohibitively expensive.

Whereas robots were previously regarded as suitable only for the large-scale, high-end production processes such as in the automotive industry, we are now seeing them being adopted in a broad variety of applications and industries.

One example is the food and beverage sector, which has increasingly woken up to the new possibilities presented by robotic technology, particularly when it comes to meeting the industry’s need for fast turnaround and short product lifecycles, which require production processes to be adapted.

The key to success for almost any manufacturer depends on the universal factors of doing things better, more quickly and for less cost in order to outperform the next best company. With UK companies exposed to high costs for raw materials and energy in particular, it’s vitally important for them to get products right first time.

Automating a process with robots, either entirely or just to handle specific operations, has been widely proven to present a great way to achieve all of these objectives. Whether it’s reducing breakages in a food packaging line or cutting and finishing metal products, robots can deliver precise and consistent performance at a much higher speed, enabling companies to increase yield and reduce overall production times whilst enhancing product quality.

With the ongoing developments in technology and steadily decreasing price tag, it’s also true to say that robots are ripe for greater adoption by SME manufacturing companies. Even the smallest operations can now benefit just as much from robotic technology as a large automotive company. Indeed, we have a number of examples showing how struggling SME companies have transformed their fortunes by introducing even just one robot to the factory floor. These companies have reported a raft of benefits, ranging from reduced production costs even through to reduced energy consumption by turning off lighting and heating in the area where the robots are installed.

Given these, and the other proven benefits resulting from robots, it’s frustrating that UK manufacturing companies are not embracing robotic technology far more than they are. When you look at the main barriers to robotic adoption in this country, they tend to stem from several key factors, all of which can be readily addressed.

There is a general lack of awareness amongst UK companies, particularly SMEs, not just of the benefits of automating processes but also of what processes can actually be automated in the first place. This makes companies reluctant to risk replacing tried and tested methods with new technologies, even though these technologies may well bring massive improvements.

For the past two years, for example, ABB’s ‘10 good reasons to invest in robots’ campaign, has demonstrated how both UK and global companies are benefiting from robotic technology (see www.abb.com/robotics for details).

ABB also works with various trade associations including the CENFRA Technical Advisory Group, the Faraday Group, and Camden BRI, to help show how robotic technology can be used to deliver benefits across a wide spectrum of manufacturing processes.

UK manufacturing lacks sufficient skills at apprentice, technician and engineer level not just to operate automated plant, but also find ways to integrate it into a process in the first place.

We are actively fostering partnerships with technical colleges throughout the UK to help equip the next generation of engineers with the skills to operate, program and integrate robotic equipment into industrial applications. With the New Engineering Foundation (NEF), we are running master classes in robotics for lecturers from technical colleges demonstrating the application of robotic technology, which they can then teach to their own students.

We also have a large, dedicated industrial robot training school in the UK, which has recently invested £100,000 in new robots for some of its 10 cells, along with classroom materials. This school is open to representatives from any company wanting to get a better perspective on what robots can do.

Perhaps the biggest obstacle to robotic adoption is the approach of UK companies to financing automation projects. Many companies typically fail to consider the lifetime costs of automated plant, instead looking only at whether it can deliver a payback of two years or less. This contrasts with the approach of many of the world’s leading adopters of robotic technology, which not only tend to take a longer term view of payback, but also to consider the other main benefits of robotic technology.

It’s also important to consider that the current state of UK manufacturing, which has seen the sector shrink by over half since 1979, is the result of our difficulty to competing with lower cost countries. But we should not assume manufacturing in low cost countries is all about labour cost – indeed, current indications would seem to show the Chinese market is slowly losing its labour cost competitiveness as workers begin to demand higher pay. Many of these areas, China included, are already investing heavily in automation for the future protection of their manufacturing base.

With the cost of implementing automation being fairly similar in both the UK and China, robotic technology presents an opportunity for a level playing field where UK-based manufacturers can compete on more equal terms.

The financing situation in the UK has been further complicated by the current problems in securing finance from the nation’s banks, which are still proving reluctant to release funds.

One possible way around this might be to create an initiative similar to the Carbon Trust, whereby manufacturers could gain access to zero or low interest loans to help finance automation projects. Alternatively, suppliers of automation equipment could make it possible for companies to trade in their existing equipment against the cost of new equipment, with the trade-in cost being offset against the price of purchase.

With the UK’s reliance on the banking sector being pinpointed as one of the main reasons for the nation’s debt problems, the Government is at last making the right noises about the importance of maintaining a manufacturing base in this country.

One key area that is being identified is the UK’s leadership in innovation. Given the inherent benefits that robots can bring, the time may well be ripe for an industrial robotic revolution in the UK as a way of producing innovative goods at competitive costs on home turf.

Made in the Midlands launches the Manufacturing Advisory Service