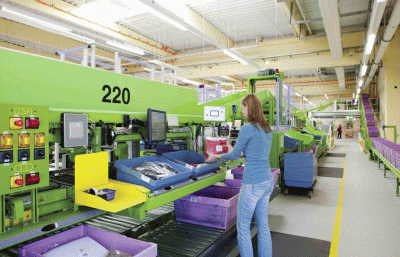 A shuttle-based storage and order picking system from Knapp is making light work of the handling of returns for the German fulfilment specialist, Hermes

Hermes Fulfilment GmbH is a member of the Otto Group, a business that made its name in mail order and for which retail, via the channels of e-commerce, catalogues and stores, is still the core activity. Hermes provides fulfilment services for companies within the Otto Group, as well as for external clients.

The company employs some 5,000 people at four logistics centres in Germany, with direct access to a large network of other logistics facilities in Europe. At its site in Haldensleben, which dispatches about 250,000 shipments per day during peak periods, Hermes has recently taken delivery of an automated handling system from Knapp that is designed to optimise the management of returns.

The solution at Hermes features Knapp’s OSR Shuttle system, the largest the company has supplied to date, which provides rapid automated storage and retrieval combined with goods-to-person picking using pick-by-light technology. In total, Knapp has installed over 7,000 shuttles at more than 120 sites worldwide.

The OSR Shuttle system achieves six times the rate of totes in/out than a traditional ASRS, and yet uses only some five per cent of the energy consumption. This energy efficiency is achieved through a combination of energy recuperation from the braking process, the use of sophisticated software to optimise power usage and intelligent design to minimise shuttle weight.

Storage for a million items

Previously at the Haldensleben facility, all returns suitable for resale were stored manually in the picking warehouse, with new orders being fulfilled using picking carts. Under the new system, the OSR Shuttle accepts about 2,000 containers of mixed returns per hour. After unpacking, checking and repacking, returned goods arrive at the store in stacks of totes, which are automatically unstacked by an overhead gantry robot and placed on the conveyor system. 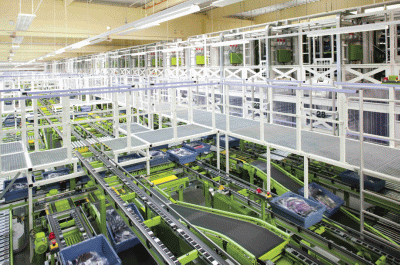 The containers of returns are then stored in the OSR Shuttle system, with up to 10 different items stored in each tote in order to achieve optimal storage density. The automated store features 176,400 storage locations, with capacity for about one million items, which are served by shuttles that operate on each level of each aisle.

When a tote is retrieved from the store, the shuttle transports it to the high-speed lift at the end of the aisle. Once at ground level, the tote is transferred via a conveyor system to one of 30 goods-to-person pick stations, which are located on two levels.

These ‘Pick-it-Easy Fashion’ workstations, part of a new range of ergonomic, industry-specific work areas from Knapp, have been designed around the needs of the fashion sector through close co-operation with both the Institute for Occupational Health of TÜV Rheinland and the Occupational Health Centre in Graz, Austria.

Totes are located directly in front of the operator, with the source container positions sloping gently towards the workstation to allow the contents to be both visible and easy to pick. Each workstation has two positions for source containers and five positions for target containers, with one of the positions being freely configurable. The operator receives picking information via a centrally located touch-screen, where he can also display a product photo if required.

Put-to-light indicators signal the tote into which items should be placed. The workstations, which allow up to 15,000 items per hour to be picked during peaks, can be activated according to demand, with every workstation able to access every product and the ability to process several order types at the same station.

By picking from mixed containers, an optimal mix of storage density and picking performance is achieved, with fluctuations in the order structure smoothed out, and the whole returns system is controlled by Knapp’s KiSoft WCS software. The automated handling system also features a network of high-level servicing walkways that ensure easy access for maintenance.

Design as a Service for Electromechanical Actuator Applications

Getting a grip on 3D imaging