Robots return to palletise at Panasonic 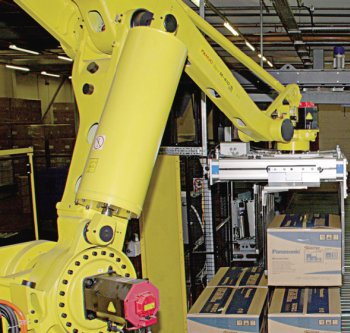 Panasonic is no newcomer to robots at its Cardiff microwave oven plant, but the recent trend, with the move to cell operation, was to concentrate on manual operations. An end-of-line palletising solution installed by Smurfit Kappa Machine Systems has changed this trend with investment in a new Fanuc Robotics M410iB palletising robot

Operating at its current location since 1987, Panasonic’s facility was originally long flow lines, but the move towards cell manufacture slowly saw increased levels of manual operation. With the original automation proving to be unreliable this led to a general belief that machines break down and humans don’t.

Move on 20 years and the outlook has changed. Daniel Humphrey, PMUK’s home appliance manufacturing general manager, believes good well-maintained machines are now highly reliable and relatively cheaper. Describing the process, Daniel explains: “There are eight manufacturing cells producing over 300 variants of microwave. These were manually transported from each cell to a palletising area where manual operators used lifters to stack the ovens and then manually wrap them. The problem with this process was that it involved three to four people collecting many variant products, in ten different sizes from several locations.”

Smurfit Kappa’s (SKMS) solution was to design and install a conveyor system to collect from each of the eight cells. Merging into a single conveyor taking all ovens to a palletising area where first they are identified by a single bar code reader and then directed to one of eight holding conveyors.

When a holding area has sufficient ovens for completing a pallet the ovens travel a short distance to the palletising pick up location. The system PLC provides palletising pattern and quantity details to the Fanuc Robotics robot.

SKMS developed a gripper to accommodate all variants of oven that weigh from 15kg to 35kg. The robot picks up two ovens at a time and places them in the correct pattern to optimise pallet size. The pallet patterns are designed to suit Panasonic’s warehouse requirements. Average time to complete a pallet is one minute.

“We now have just one operator in the palletising area and there is no longer a lifting requirement. The system has been designed to be straightforward and it works effectively. Overcoming any reliability concerns the system is proving to be highly reliable,” comments Humphrey.