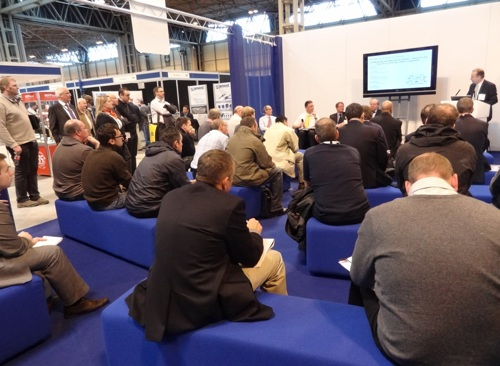 The 8th to the 10th of April saw DFA Media hosting it’s most successful event yet at Birmingham’s NEC with co-located events Plant and Asset Management, European Offshore and Energy, Drives and Controls, Fluid Power and Systems and Air-Tech. The B2B exhibition hosted 12,793 attendees according to official figures, an increase of 15% from 2012.

Over 1000 delegates attended free technical seminars on topical issues, where speakers offered their insight and advice on specific topics.

Other highlights included a discussion on safety in the wind energy sector by Steve Green of Safety Technology; Opportunities in the supply chain for marine renewables by Stephanie Merry, Renewable Energy Association; Unconventional Gas by Nick Grealy, NoHotAir.

Another addition to this years event was the staging of the Motor Driven Conference (MDS). MDS is focused on helping industry professionals to generate savings from motor driven apparatus, such as pumps, fans and compressors, by applying a systems engineering approach to reduce energy, improve performance and ultimately save money.

The inaugural outing of European Offshore & Energy was also met with a positive response from exhibitors, with the latest products and solutions for offshore energy brought together. Vic Clapshore, sales and marketing manager of Laser Cladding Technology Ltd., remarked: “It’s the first time we’ve been here,Tuesday was fantastic we had a lot of interest, overall it’s been a fantastic week for us and we’ve actually rebooked already.”

This sentiment was echoed by Steve Young, business development and outside sales, Deepwater Corrosion Services, who commented: “It’s gone well, there’s a wide variety of different organisations here and we’ve educated a lot of people about our products and spoken to a lot of people who we believe will become clients in the future.

Geoff Walker, director, Artesis, enthused: “It’s been marvelous. We’ve had lots of people coming onto the stand and a wider caliber of people than expected. I think that’s perhaps to do with the range of events taking place.”

Drives & Controls again brought together key suppliers of state-of-the-art equipment representing the multi-tasking culture of today’s design engineer, covering critical areas such as energy efficiency, machine safety, drives, motion control and automation plus much more, all under one roof.

Lenze had set itself a target of raising its enquiry level by at least 25% over the figure it achieved at the 2012 Drives Show, and easily exceeded this target. “We’ve had some cracking enquiries,” says marketing manager, Geoff Spear. One of these enquiries could potentially be worth£500,000 to the company.

While Carl Krajewski, managing director of Siemens’ UK motion and controls partner, HMK, reported that despite the problems on the roads, his company took 50% more enquiries on the first day of the show than it did at the previous event.

Fluid Power & Systems, which has the full support of the British Fluid Power Association (BFPA), is the only exhibition in the UK totally focused on hydraulics, pneumatics, systems and related equipment, and as such has proved to be the popular choice for fluid power system manufacturers and distributors.

Air-Tech covered current key themes related to the very latest in air compressor and related technology from companies from around the globe .The event is supported by the British Compressed Air Society (BCAS), and is the UK’s only dedicated event for the compressed air and generators market.

Steve Downes, sales director (UK & Ireland), Gardner Denver Ltd., was very enthusiastic about the show: “The show’s been really good for us. It’s about flying the flag for Gardner Denver, we do a really good job outside of the show but bringing people here gets people to see what we do, and is a chance to show all our products at once, we don’t normally get to do that. Opportunities like this are really great!”

DFA Media managing director, Ian Atkinson, concluded: “We were absolutely delighted both with so many aspects of this years event; including the extremely positive response received from many of the exhibitors, the well-organised layout, and the general visual appeal throughout. Moreover, the popularity – which has exceeded all DFA Media co-located events hitherto – has to be a strong reflection of the growing economic optimism within the UK and beyond. We would like to extend our thanks to the exhibitors, seminar presenters, visitors and our own internal staff for turning this years event into a major success. We are now already gearing-up for the 2016 shows.

The co-located DFA Media events will return to the NEC, Birmingham from 12th to 14th April 2016.