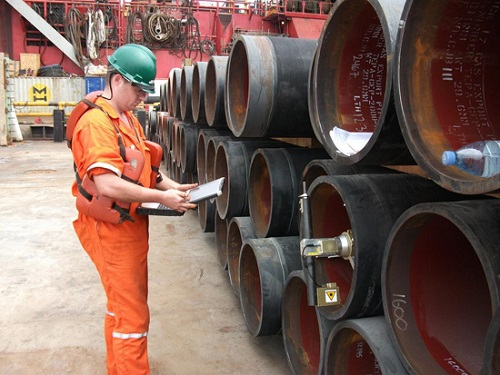 In oil and gas pipeline projects, the welding of fatigue-sensitive subsea SCR and flowline pipes to tight specifications is critical. This was particularly true during the recent laying of production pipelines between Barrow Island and the Gorgon and Jansz-Io gas fields. The critical section of this pipeline crosses the Jansz shelf escarpment, which is considered one of the most significant challenges on the Gorgon project’s offshore scope. This involved laying three pipelines in 200m of water at the top of the escarpment down to a water depth of 730m. Due to the increased water flow pressures across the escarpment, the 30-inch diameter pipes are highly fatigue-sensitive. The welding of these pipes to precise engineering tolerances was therefore critical.

OMS conducted a pipe measurement and fit-up survey to ascertain which pipes would be suitable for the Jansz Scarp section of the pipeline and in which sequence these pipes should be welded in order to minimise project Hi-Lo.

As Hugh Davies, client solutions director at OMS states: “In order to prevent bottlenecks during welding and to minimise project delays and risks, OMS captured, recorded and analysed pipe end geometry quickly and accurately. This measurement data was then made available to OMS’ pipe analysis, simulation and fit-up software, SmartFit™, which then calculated the optimum sequence for these pipes before they are delivered into the bead stall for welding. This ensured that the pipe ends would fit together within the welding specification requirements, which for the Jansz Scarp Crossing project, were absolutely critical.”

Two OMS operators were deployed to Australia in September 2013 to carry out the onshore inspection of pipes. Using OMS’ PipeChecker™ laser-based measurement tool, the operators measured the geometry of the internal walls of more than 400 pipe ends. This resulted in around 70 pipes being selected as the most suitable  for the Jansz Scarp Crossing pipeline. This pipe measurement data was then made available to OMS’ SmartFit™ software, which was then able to calculate the best possible fit-up sequence for the pipes.

For this project, the HiLo requirement was less than or equal to 0.5mm. The weld seam had to be within +/- 45 degrees of TDC. In addition, the longitudinal weld seams had to be offset to at least 100mm. This data was configured into SmartFit™. The software analysed the fit-up of the pipes and allowed the operators to mark the best rotational position on each pipe end. In the bead stall, these marks were then aligned to immediately achieve the best rotational position so that misalignment was minimised and the project HiLo was achieved. Any problem pipes that didn’t fit at the specified HiLo were also indicated and re-sequenced or removed completely so that fit-up problems did not occur in the bead stall. Production delays due to mismatched pipes were therefore avoided.

As Hugh Davies concludes: “As well as using SmartFit to optimise the sequence of pipe ends, OMS also managed the pipe sequencing process onboard the pipelaying vessel. This ensured that the correct pipes were brought into the bead stall in exactly the right sequence.”

Optimization, acceleration and automation of processes

Final call to win recognition for the best-in-class engineering, science and technology innovations of 2017

UK at risk of losing out on the rewards of AI and data-driven technology, finds first-of-its-kind analysis from the Centre for Data Ethics and Innovation