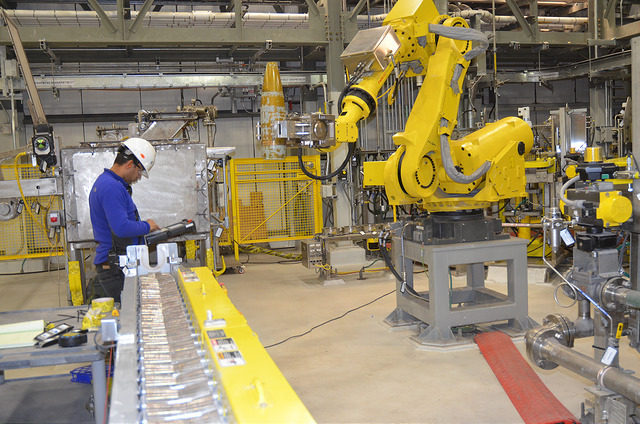 The most recent industrial revolution brings up conflicting feedback and opinions from many factory employees. Some believe all these changes are happening for the betterment of their lives, while others tends to believe that involvement of robots in a manufacturing scenario is only going to make them jobless. Well, industrial revolution 4.0 is not going anywhere because  people are recognising its potential. However, this does not necessarily mean an end to the human-driven manufacturing environment. In fact, robotic involvement in a manufacturing plant is only going to replace humans from doing risky and mundane jobs. This allows employees to engage in more productive tasks while the robots take care of the boring, repetitive, and physically demanding jobs on a production line.

Why you should not fear the Rise of the Robots

Relax, the rise of robots we are seeing now is nothing like the movie Terminator. Rather, these robots on production lines are specifically designed and programmed with a set of skills in order to perform the tasks assigned, and that is all. Humans will still be in complete control of the production line, they just wont be exposed to harsh environments or dangerous situations like before.

Robots are becoming, and will continue to become, a big part of any production line.  However, this does not mean that human jobs will completely disappear. The gradual engagement of robots ensure that humans aren’t going to be written out of the manufacturing industry, rather the workers are going to be taught the necessary knowledge on how to adapt to a more automated manufacturing scenario and co-exist with robots. Somebody has to work with, and tell the robots what to do, that will be the new job.

Robotic arms can can do monotonous tasks all day long and not get tired, humans can not. By adapting to robotics, you can move a human worker to a more creative role in R&D or management roles , ultimately making the entire workforce happier, and production more efficient. Of course, the human workers need will need adapt to new positions which will require some learning, but in an era of automation, everyone needs to be able to grow with the technology. Gaining efficiency through the use of robots takes some planning and patience, but adaptability is the key.

As robots become more prominent, it is undeniable that there will be some job loss. Outrages based on similar theories broke out during the 2nd and 3rd industrial revolution as well, but soon the workers realized that new job opportunities will still keep them in the work force, as long as they take the initiative to learn. Industrial Revolution 4.0 is going to have the same outcome as well, some existing jobs will diminish while the newer ones will take over. Robot R&D, maintenance, software development, and robot implementation planning will more than replace the positions lost on the production line, and more importantly, come with increased compensation.

The concerns of the workers’ towards robotics and artificial intelligence has been given elaborate thoughts by a good number of people, and Elon Musk’s ‘build safe AI’ movement is one milestone in that regard. OpenAI, a non-profit organization created by him raises awareness about what machines can do if we are not careful. Apart from the awareness drive, the fact that this panic has been taking place for almost almost five decades, is also cited. The key thing to remember is is – There will always be a “What If?” when new technology is introduced, but mankind needs to keep in touch with what the future requires, as well as remaining in control of the technology.

Workers worrying about their jobs is only natural, but like every revolution that has happened before, this issue will be addressed and resolved for the betterment of the future. In the meantime, its always important to stay on top of your skills, as well as develop new ones in order to be ready for the changing times.