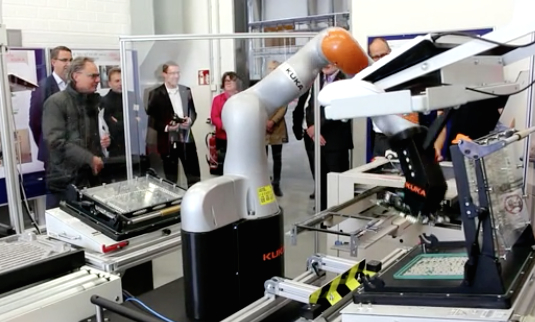 Fujitsu is changing the way computer mainboards are manufactured and tested, with a pioneering collaboration where robots assist humans, working side-by-side on electronics assembly lines. The safety-first deployment is part of a co-creation project with automation expert KUKA at the Fujitsu Digital Smart Factory in Augsburg, Germany, one of the world’s most modern IT production facilities.

Industrial robots are well-established in various automation tasks. In this ground-breaking mainstream electronics implementation, human-robot collaboration includes the handling of delicate computer components: a task that was previously considered beyond the range of robotic automation. To make the approach more quickly available to other manufacturing companies, Fujitsu and KUKA have developed an Industry 4.0 robot-based process automation solution to provide high-precision mainboard handling and testing.

In this breakthrough deployment, robots assist human workers in an integrated process. Inside the Fujitsu factory, robots work alongside human colleagues instead of being restricted to separate, fenced-off areas. Robots can detect when humans are in the proximity, and slow down their movements to ensure there is no danger of injury to their human colleagues. The collaboration starts with a human worker teaching the robot required assembly steps by manual guidance of the robot arm. These steps are then embedded in the robot’s capabilities using machine learning – without any additional programming. Once instructed, humans leave the shared working spaces, allowing robots to operate behind virtual safety barriers, switching to high-speed mode to complete monotonous and repetitive tasks.

Vera Schneevoigt, Senior VP, Product Supply Operations at Fujitsu EMEIA, says: “As a manufacturer itself, Fujitsu has every incentive to lead the way in the most advanced techniques, not only to improve the efficiency of internal processes, but also to be able to offer those improvements to other manufacturers. This collaboration between Fujitsu and KUKA is a powerful example of how we are setting the pace, with human-robot collaboration an integral part of Industry 4.0. We are pioneering a new method of assembling precision electronics components that reduces the need for human operators to perform repetitive, mundane tasks, lowers the risk of potential manufacturing defects and raises production outputs.”

Dr. Bernd Liepert, Chief Innovation Officer at KUKA, says: “KUKA and Fujitsu have been working together in an example of true co-creation for about a year in the Augsburg Technology Park, to bring the advantages of human-robot collaboration to Fujitsu’s ultra-modern IT facility. This latest project requires a robot like the sensitive KUKA lightweight robot LBR iiwa that can handle the highly sensitive boards.”

To realize this visionary project, KUKA and Fujitsu engineers combined their Industry 4.0 expertise with process know-how. Following a successful pilot, one of KUKA’s lightweight construction robots was fully integrated into Fujitsu’s mainboard production line in late January 2018, helping boost manufacturing efficiency, accuracy and quality. A second robot will be added in summer 2018.

Fujitsu and KUKA plan to add further capabilities such as data analytics to explore the potential of human-robot collaboration in areas such as predictive maintenance and quality control, as well as new possibilities for usage-based billing models.

Fujitsu solutions for Industry 4.0 and the digitalisation of production environments can be seen at this year’s Hannover Messe, taking place from April 23-27, at Booth E16, Hall 07.