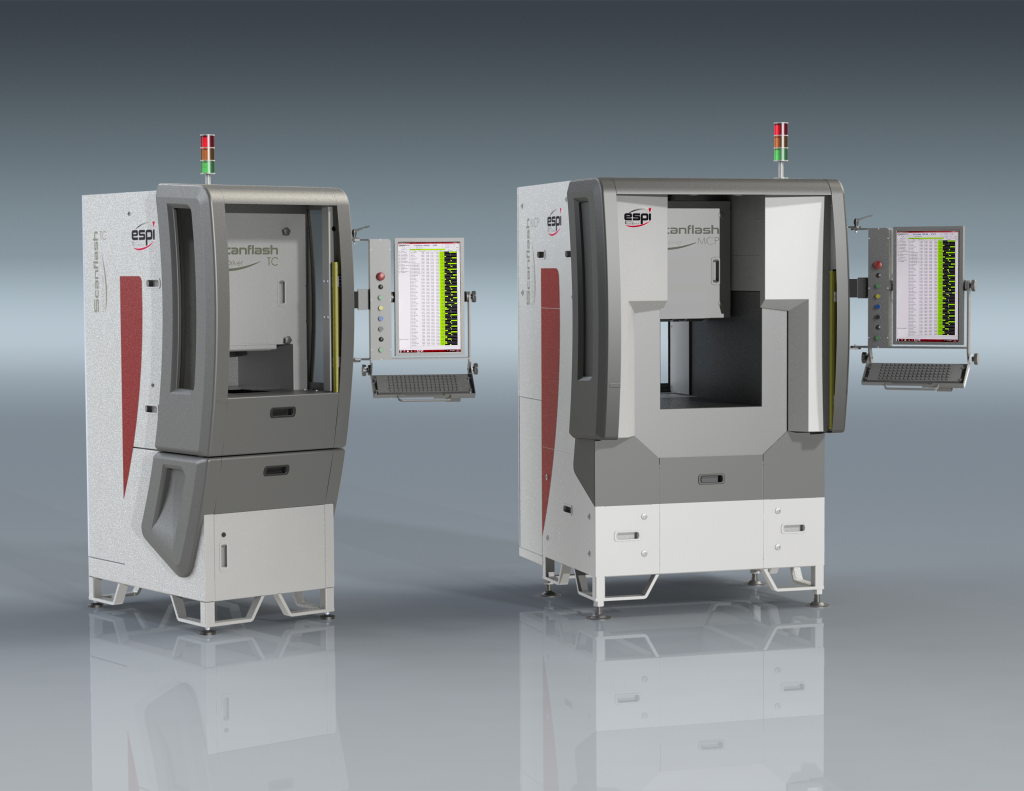 ESPI, a specialist in innovative hardware and software solutions for measuring and controlling machine tools, has launched Scanflash, a new device designed to make fast and accurate geometric measurements and subsequent adjustments to machine tools on the shop floor.

In around 10 seconds, Scanflash machines are able to control machining process deviations based on the measurement of parts, calculating the corrections required to the machine tools to achieve target-centred output. The machines push the boundaries of ‘traditional’ control devices and techniques to meet the ever more complex needs of machine tool operators in terms of repeatability, flexibility, responsiveness and ultimately productivity.

The first-generation Coordinate Measuring Machines (CMM) were designed to be used in controlled laboratory environments. Some of them have gradually been enhanced to adapt to the variable conditions commonly found in a manufacturing scenario, and to operate within the production line. They are, however, still based on the original principle and their measurement speed is often too slow in light of today’s production requirements.

ESPI has used 20 years of know-how to design a standard machine able to operate in even the most challenging production environments and enable the fast and accurate change-over of production runs.

Vincent Borgraeve, UK Sales Manager says that Scanflash was conceived and produced following discussions with clients: “Customers need to measure and calculate ever-more complex geometrical elements which require measuring equipment that go beyond simple gauging. They also need to make fast and accurate measurements without causing a bottleneck within the production process. Owing to its speed, which is more than ten times faster than traditional machines, and is accurate to within a micrometre, Scanflash has enabled them to increase productivity.”

The range of Scanflash machines combines the speed and precision of ESPI special-purpose machines with the flexibility of traditional coordinate measuring machines. From the outset, the machine architecture was carefully considered to meet the speed and strength requirements at production sites.  These innovative machines can handle temperatures ranging from 10°C to 45°C with relative humidity ranging from 20% to 80%. They offer precision to +/- 0.2 to 0.75µm, resolution of 0.1µm, probing velocity of 8 to 30mm/s and a cycle time of less than 1 second per characteristic.

Scanflash machines draw on the same kinematic and control technologies that make machining centres so sturdy and fast. They are digitally-controlled, with their movements guided by linear motors delivering speeds of up to 600mm/s and acceleration up to 4m/s².

Parts are controlled through probing done in a single operation. The automatic changing of the stylus in less than three seconds ensures the machine adapts to the characteristics of the specific measurement to be taken, thus offering greater precision without loss of productivity.

To control a piece in production, the operator simply sets the appropriate measurement range. In around 10 seconds, the Scanflash automatic measurement process provides measurements and any deviations observed as compared to pre-defined tolerances. When deviations are identified on certain dimensions, the operator is able to integrate corrective actions to be taken on the machine tool. For faster working speed and to avoid having to do tedious calculations, ESPI has developed a tool that sends the necessary corrections directly to the digital control, as soon as the regulator confirms them.

Scanflash eliminates temperature variations by automatically correcting the expansion effects of machine mechanisms and the material of the part to be controlled. In addition, it can easily be moved around in the workshop depending on production requirements. It suffices for a measurement to be taken on a standard part to instantly restore the machine’s performance and precision so that it becomes operational again.

Vincent Borgraeve adds: “Dozens of Scanflash measurement centres are used by aerospace equipment manufacturers, car manufacturers, prestigious watchmakers as well as subcontractors renowned for their precision mechanics. For these clients, the immediate availability of the measurements coupled with the time saving related to machine tool configuration have offered returns on investment well within 12 months”.

The Scanflash range currently encompasses the TC and MCP models which are distinguished by their measurement volume of the controlled parts and level of precision. A new model is due to be launched soon to offer additional measurement capabilities.