How pioneering drone technology could aid conservation of endangered species 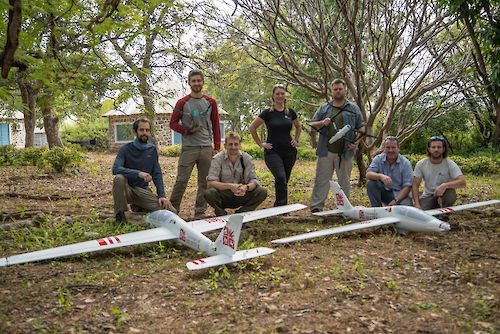 With funding from Cabot Institute for the Environment, BZS and the EPSRC’s CASCADE grant, a joint team flew to Cameroon in December to trial the use of drones, sensor technologies and deployment techniques to monitor populations of the Critically Endangered Kordofan giraffe at Bénoué National Park.

“There has been a significant and drastic decline recently of larger mammals in the park and it is vital that accurate measurements of populations can be established to guide our conservation actions,” said Dr Gráinne McCabe, Head of Field Conservation and Science at Bristol Zoological Society.

The team were able to draw on successful collaborations using drones to monitor and measure volcanic emissions to begin developing a system for wildlife monitoring.

“On the surface this might seem relatively easy but imagine an area the size of greater London – (~1600 square kilometres) – heavily wooded, in which you are trying to find and identify an estimated population of just twenty to thirty Kordofan giraffe,” said Dr Watson.

“It is likely that we will need more than one type of drone, and several different sensors to allow us to operate 24 hours a day and throughout the year. Modern multispectral cameras combined with machine learning and high-performance vehicles will need to be fully automated to cover an area of this size. Combine that with remote, constrained field operations and we have an interesting set of engineering problems to tackle,” said Dr Richardson.

Dr Watson and Dr Richardson, together with Dr Tilo Burghardt from the Department of Computer Science are now working with Bristol Zoological Society to put together a large-scale proposal to develop the technologies required for this challenge.

“A machine learning based system that we develop for the Kordofan giraffe will be applicable to a range of large mammals. Combine that with low-cost aircraft systems capable of automated deployment without the need for large open spaces to launch and land, and we will be able to make a real difference to conservation projects worldwide,” said Dr Watson.

The group are planning to return in early 2021 and would be keen to hear from any potential project partners, either individuals or organisations.