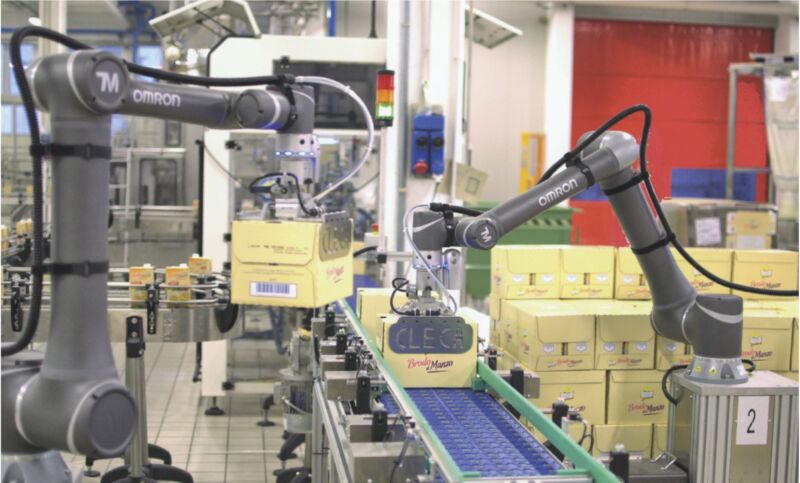 Labour shortages have reached chronic levels in the food and drink industry. Can manufacturers automate their way out of the crisis? By Stuart Coulton, UK market development manager, Omron Industrial Automation

Long-held fears that robots might rob human workers of their jobs are finally starting to dissipate with the realisation that there simply isn’t enough available labour to keep the wheels of the UK’s food and drink sector turning.

The restaurant and hospitality sector, which has been hard-hit by covid, is now struggling to get back on its feet due to acute staff shortages. But rather than waiting for the situation to improve, businesses are turning to automation, whether in the form of robot chefs, contactless ordering or payment apps.

In food and beverage manufacturing the situation is slightly different. Factories have had to remain open for business throughout the pandemic to satisfy a spike in demand for at-home food and drink from the online retail channel.

But as the economy starts to reopen again, the food industry is warning that it is nearing a tipping point in terms of its ability to keep supermarket shelves stocked, owing to a deepening labour crisis. From harvesting, manufacturing and packaging to logistics, the entire food supply chain is being stretched to its limits by staff shortages.

0According to a recent report from the Association of Labour Providers (ALP), 78% of food and drink firms said they do not expect to have sufficient workers in 2021, more than one third are experiencing chronic shortages and a quarter said they were in crisis and will rationalise/reduce their output[1].

The shortages started with Brexit, which capped inflows of low-paid workers from the European Union. The situation was exacerbated by the pandemic with thousands of workers from the 27-nation bloc leaving the UK. Now as the economy reopens, those workers seem in no rush to return.

There have been calls for government intervention to address the issue. However, policy changes don’t happen fast and the food industry needs solutions now. It is time to embrace and engage with automation…and that requires a speedy shift in mindset.

Seasonal peaks are the biggest pinch points for food operators in terms of labour shortages. Whilst summer is usually a quiet period, this year, with many Brits choosing to holiday in the UK, the pressure on the food supply chain has been relentless.

This is where automation could come into play and relieve some of the pressure.

End-of-line operations such as palletising and case packing are the most obvious candidates for automation in most factory settings. Not only is it difficult to find workers who are willing to perform lifting, stacking and packing duties, but from an employer perspective, these tasks carry a health & safety risk. According to HSE figures, manual handling is responsible for a third of workplace accidents[2].

When people think of end-of-line automation, they often think of clunky robots that are bolted to the floor and surrounded by cages and guarding, occupying lots of space and only capable of performing highly repetitive tasks. Whilst this might have been true in the past, with advancements in technology and the advent of the cobot, it certainly isn’t the case anymore.

Cobots – collaborative robots that can work alongside humans – don’t need any guarding, which makes their footprint much smaller than a conventional robot. They are also ‘out of the box’ ‘plug and play’ systems that don’t require any programming skills. These factors mean they can easily be switched between different lines without complicated set-up, as was the case with conventional robots. During periods of low demand, the cobot can be quickly redeployed to increase capacity for a product experiencing high seasonal demand.

Business owners, particularly in the SME sector, might argue that even with the ability to service different lines with the same cobot, the financial case for automation still won’t stack up, as during the lulls in demand, the cobot will be idle.

However, food operators should revisit calculations they may have made previously when weighing up the case for automation, as with cobots, the payback threshold is much lower. The purchase price is up to 50% less than a comparable traditional palletiser robot, making it a more viable investment for businesses that have previously ruled out robotics on cost grounds. This even applies to seasonal businesses who need to factor in the troughs as well as the peaks.

For businesses who cannot justify the capital outlay there are an increasing number of leasing and flexible finance solutions available. These enable finance managers to shift the cost from being a capital investment to an operational expenditure, thereby de-risking the decision to automate.

The food supply chain is facing unprecedented labour shortages and its best hope of averting crisis is to follow the example of hospitality and turn to automation. Even if food operators have reviewed automation in the past, our advice would be to look at it afresh. Now that collaborative robots – with their ease of set-up, flexibility and lower capital cost – are on the scene, it is a very different proposition.