Laser Components has now added another module to its COUNT range, the COUNT-S.  By using its own SAP500 and specially designed passive quenching circuits from qutools, the COUNT-S is a lower cost alternative to other photon counters available on the market today!

The COUNT-S was designed with students in mind, providing for the first time an affordable way to introduce experiments into the fields of laser physics and quantum optics without the costs involved with actively quenched photon counting units. Suitable for applications such as (but not limited to) particle sizing, fluorescence, quantum cryptography, spectroscopy.

The SEEPOS is a new versatile PSD signal processing tool designed to interface with your PSD and connect directly to your computer!  The high speed electronics together with its USB 2.0 interface are key components in making the SEEPOS an easy to use system, and with its large dynamic range, laser spots from nW to mW can be detected in both CW and modulated modes.

The SEEPOS is provided with a USB stick containing the SEEPOS software package (LabVIEW compatible!), which allows you to control all features of your system such as bias voltage, amplifier gain, analogue and digital features, and many more through an intuitive graphical user interface!

The SEEPOS software continually displays the real time spot position in both XY and X(t), Y(t) graphs, and with optimised inbuilt plot algorithms all data is visually seen on screen, even during full speed measurements!  This software also includes a complete data analysis suite which provides tools for data analysis and visualisation which allow you to rapidly scan through large sets of data in order to find specific sections of interest, removing the valuable time where you have would to sit and sieve through huge chunks of data.

The SEEPOS hardware features a DB9 connector for the PSD mounts (which can be provided to you in their full assembly), a USB interface, and light source modulation input and output triggers (BNC connectors) for when you want to modulate the light to increase system accuracy.

The SEEPOS is ideal for users starting to explore the world of PSDs and who want a simple system to become familiar with the technology, experienced users who need a test bed to develop their own OEM PSD system, or experienced users who want to test the various parameters of PSDs or optimise their current systems. 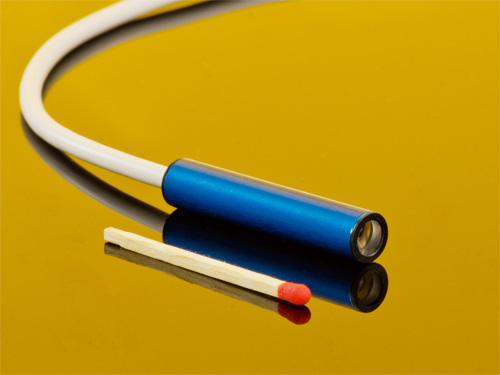 The growing UK industry is turning towards machine vision for automated product inspection applications such as pass/fail decisions, edge detection, 3D profiling, and object metrology to increase factory throughput to meet consumer demand.  LASER COMPONENTS’ range of machine vision laser modules has been designed specifically for these applications where a line of uniform intensity is required for your vision system.

A laser illumination source emits polarised light that will eliminate any surface glare during measurement to provide a sharper, cleaner image which can be easily processed.

Laser sources also feature a tight spectral bandwidth (typically ±5-10nm) which allows you to use tighter filters with your detector.  This provides you with the option to block out as much ambient light as possible which would otherwise interfere with your readings.

Many machine vision systems use a pulsed or modulated to reduce ambient light interference, and to accommodate this we have designed our modules to feature an optional modulation cable which can operate at frequencies up to 1MHz (wavelength dependent).

More information can be found on the Laser Components website>