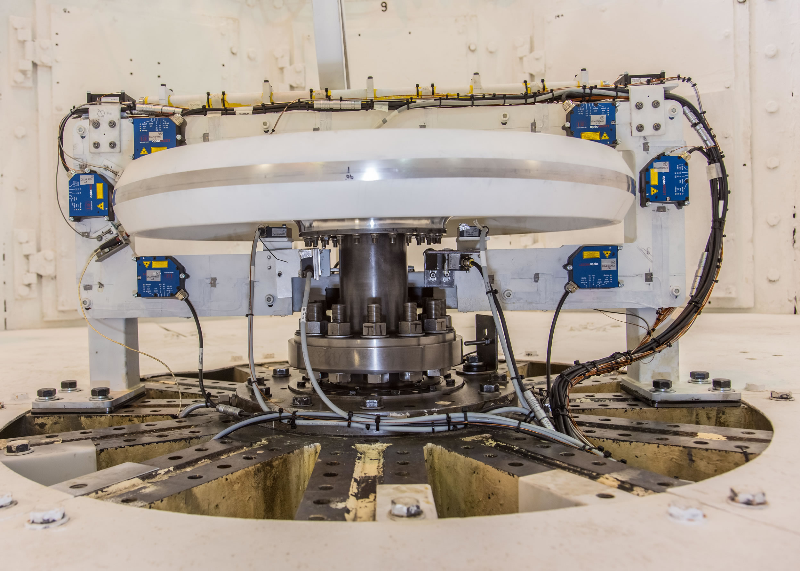 Micro-Epsilon UK has supplied a variety of non-contact laser displacement sensors and an infrared thermal imaging camera for use in a high speed (up to 10,500rpm) wheel spin test, part of the BLOODHOUND SSC Project – the 1,000 mph land speed record attempt that is scheduled to take place in 2016.

The wheel spin test, which took place on 6th June 2014 at Rolls-Royce’s test facility in Derby, was carried out on the first of the BLOODHOUND machine’s four solid aluminium wheels. The Rolls-Royce facility is normally used to test jet engine fans and turbines in a vacuum, but on this occasion the wheel spin test was the highest ever rpm recorded on the test rig.

The objective of the wheel spin test was to verify that the growth (expansion), temperature increase (due to air friction) and vibration of the wheel were within expected, safe limits and whether these test results would closely match the BLOODHOUND Team’s own predictions using computer simulation and FEA software.

For the wheel spin test, Micro-Epsilon UK supplied a total of 15 laser displacement sensors from its optoNCDT series, as well as a thermoIMAGER TIM 450 compact, high resolution infrared imaging camera.

The optoNCDT 1700 series of laser displacement sensors provides multi-functional features. The Real Time Surface Compensation (RTSC) feature enables measurement against a wide range of material surfaces. The sensor’s compact design (and integrated conditioning electronics) makes it ideal for a variety of industrial applications in R&D, testing, automation and OEM production systems. Measuring ranges are from 2mm up to 750mm. Maximum linearity is 2µm and maximum resolution is 0.1µm. Measuring rates are configurable up to 2.5kHz and a freely programmable limit switch is also provided.

In addition to the optoNCDT 1700 sensors, the test rig was also equipped with four optoNCDT 1402 laser sensors (with a measuring range of 5mm), which were mounted underneath the test rig in a confined space. These sensors measured the run out, alignment and any other movements of the test rig, including the steel hub that the wheel is mounted to.

The optoNCDT 1402 is a compact laser sensor with an integrated, digital signal processor. The sensor is designed for non-contact displacement, distance and position measurement tasks against a wide variety of material surfaces. The sensor connector can be rotated through 90 degrees to allow the sensor to be located in small, confined spaces and offers analogue or RS422 output. Measuring ranges are from 5mm up to 600mm. Maximum linearity is 9µm and maximum resolution is 0.6µm. Measuring rates are configurable up to 1.5kHz and a Trigger Input and Teach-In feature are also provided.

Micro-Epsilon also supplied its thermoIMAGER TIM 450 infrared imaging camera for the wheel spin test. This compact, high resolution camera was located in a confined space underneath the test rig to monitor the temperature of the entire wheel during the spin test.

As Glenn Wedgbrow, sales manager at Micro-Epsilon UK commented: “The thermoIMAGER TIM 450 camera was chosen for this task mainly because of its high resolution and its compact design, which enabled the camera to be set up in the floor panels underneath the test rig, looking up across a very wide field of view from a short standoff distance to measure the temperature of the complete radius of the wheel.”

The thermoIMAGER TIM 450 inline infrared thermal imager is a high resolution camera that offers improved image resolution, but also detects very small temperature differences. The TIM 450 is able to capture and store thermal video and images with extremely high optical resolution (382 x 288 pixels) at a full frame rate of 80Hz. The camera is also equipped with a detector that provides excellent thermal sensitivities of 40mK. This enables the camera to detect even smaller changes in temperature.

During the test, the wheel was successfully spun to 10,429 rpm (174 revolutions per second). Test results were similar to the predictions that the BLOODHOUND engineers had calculated using their computer simulation software. The expansion of the wheel’s 902.6mm diameter by 1.6mm was as expected. So too was the “dishing” of the wheel caused by a variation in expansion rates between the aluminium material of the wheel and the steel hub. According to the BLOODHOUND Team, the empirical data collected during the test will now be used to fine-tune the computer simulations, delivering a more optimum wheel design.

Joe Holdsworth, systems engineer at BLOODHOUND Programme stated: “Simulation and modelling are great, but at some point you have to test what happens in the real world. With such small changes in wheel dimensions and the expense of testing time, it was vital to choose sensors that could deliver the accuracy needed – and the sensors we used delivered just that.”