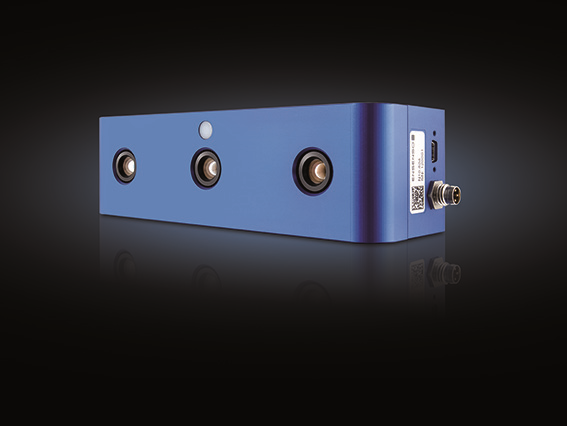 In virtually every industry, 3D Sensors are being used to optimise production processes, improve quality control and reduce manufacturing costs. Cutting-edge 3D camera technology, such as the SmartRay ECCO 75 and the new Ensenso rugged N35, both utilising HALCON’s superb 3D vision tools can be seen at the PPMA Show, Stand A52.

In virtually every industry, 3D Sensors are being used to optimise production processes, improve quality control and reduce manufacturing costs.

The SmartRay ECCO 3D camera range, new cutting edge 3D-sensors that use ‘laser triangulation’ with innovative image formation technology to create detailed 3D images. Laser triangulation is produced by a laser line being projected onto an object, which is reflected back onto an image sensor. Due to the angle between the laser line and the image sensor, the reflected laser line appears at different positions in the image depending on the height of the object at each point. The 3D Sensor measures the profile of the object. Relative movement between the object and the 3D Sensor creates a 3D model of the surface of the object.

Due to the nature of laser triangulation the SmartRay ECCO range are ideal for applications that require high precision measurements of objects that are moving. This is typical in glue bead inspection, defect detection in packaging, measuring medical instruments, weld inspection, automotive part inspection and so on. It is also possible to inspect 3D data of an object of uniform colour, for example tyre tread.

The Ensenso 3D camera range produce their 3D images according to the ‘projected texture stereo vision’ principle. Each model has two integrated CMOS sensors and a projector that casts a random point pattern onto the object to be captured. The key advantage of the pattern is that it also works in multi-camera mode and can capture images of surfaces that have virtually no texture at all! Ensenso also has a direct interface into MVTec’s Halcon and their impressive 3D processing tools.

Ensenso projected texture stereo method is ideal for applications where an image of an area scene is required to determine the inspection. This is readily understood if you take the example of robot bin picking, where the whole bin is imaged. This 3D image data is then processed and the results are fed to a robot which can then select the correct item from the bin of multiple objects. Other examples include measuring the volume of packages for logistics purposes, volumetric measurement of fruit and vegetables and profiling tree trunks for intelligent sawing to create the most timber from a given tree.

Finally Multipix will demonstrate the latest Smart Camera technology. Smart Cameras are widely used within the food & beverage, pharmaceutical and automotive industries.  The P-Series from Datalogic with their IP67 rated housing are ideal for these applications with models include VGA to 1.3MP resolution and utilising the Datalogic IMPACT Lite software.  With more than 25 inspection tools, IMPACT LITE revolutionises device programming by making the inspection configuration quick and intuitive. P-Series smart cameras are ideal for common applications, such as, OCR, Barcode, Measurement and Defect.

Automating the task with confidence