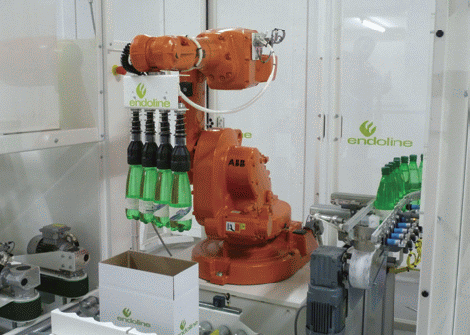 For the first time Endoline Machinery is set to launch complete packaging assembly lines with robotic pick and place systems as part of a partnership with ABB.

The ABB robot will form an integral part of the new packaging module and will be built into an Endoline conveyor system. The conveyor will feed from a high speed case erector and into a case sealer – the type of these Endoline machines will be determined based on each customer’s individual needs – highlighting the diversity of this project.  Endoline Machinery’s own engineers will program the robot.

At the forthcoming PPMA Show Endoline will showcase the new line using an ABB IRB1600 robot – which delivers maximum output from a smaller footprint.

The move into robotics follows a staggering 300 per cent rise in the demand for industrial robots within the UK food and beverage sector over the last three years. However this increase is still notably behind that of the industry’s counterparts throughout Europe, particularly Germany and Sweden, which boasts take up rates of up to 240 robots per 10,000 workers – compared to the UK’s 52 robots per 10,000 workers. This is particularly significant to Endoline which is currently driving international sales and has witnessed a 30 per cent increase in exports over a 12 month period.

Alan Yates, CEO of Endoline Machinery, comments: “We are delighted to become part of ABB’s Robotic Partner Network. With their network of global offices we are looking forward to working with them to support out our worldwide activities especially in China where we are opening a satellite manufacturing unit.”

In addition Endoline has also launched its new high speed Case Erector, available as a tape or glue model, running up to speeds of up to 25 cases per minute, an increase of 12 per cent. The increase in speed is due to the inclusion of a programmable servo drive system which permits greater flexibility by allowing instant acceleration and stopping of cases through the erecting process. Yates comments: “We are constantly looking at the most innovative technology to ensure that our machine offering is of the highest standard as many of our customers are requesting higher speed and efficiency settings for their packaging lines.”