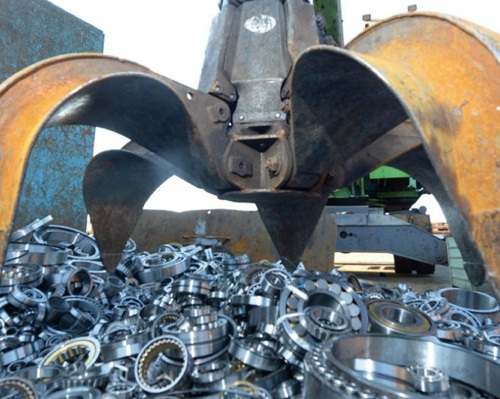 On this occasion, the bearings were destroyed at the premises of INTERSEROH Franken Rohstoff, a metal recycling company based in Schweinfurt, Germany.

A large proportion of the counterfeit Schaeffler bearings were seized in raids on bearing distributors across Europe, including Italy, Germany and the UK. “Brand and product piracy is not something that is limited to China or south east Europe. It also takes place right on our doorstep,” said Ingrid Bichelmeir-Böhn, leader of the Global Brand Protection Team at Schaeffler. “The German and European markets are no longer flooded with just counterfeit luxury and consumer goods, there has also been an increase in counterfeit safety critical industrial products such as rolling bearings.”

The recent seizure and subsequent process of destroying the various sizes and types of counterfeit rolling bearings involves crushing the bearings in a scrap press. The press breaks-up the bearings into smaller pieces, damaging them so much that they are rendered unusable. Larger sized bearings with an outside diameter of more than one metre, which were too large for the scrap press, were destroyed manually using a blowtorch.

The spindle bearings, spherical roller bearings, ball bearings and needle roller bearings scrapped during this operation were part of a much larger seizure of confiscated counterfeit products. The majority of these products were disposed of locally under the supervision of the relevant German national authorities.

Worldwide, Schaeffler is actively pursuing the counterfeiting of rolling bearings and the distribution of these products, which in some cases leads to prosecution. Not only is there a threat of claims being made under civil law for ‘cease and desist orders’, damages and the submission of counterfeit products for destruction, but there is also a threat of prosecution under criminal law, which could lead to a fine and/or imprisonment.

The economic losses caused by counterfeit products are difficult to estimate. As well as lost sales and damage to the image of the bearing manufacturer, high costs are also incurred for investigating, confiscating and correctly disposing of counterfeit bearings.

Not only is damage caused to legitimate companies that research, develop and manufacture bearings, but also to those companies that install counterfeit components and to their customers. A recent case in Switzerland proved once again that significant damage can be caused by the failure of a rolling bearing, particularly if the bearing is a safety critical component on a machine or production line. The customer in Switzerland complained that a counterfeit cylindrical rolling bearing was fitted during the repair of one of its machines. Despite regular maintenance, hot running of the bearings occurred after just six months. This was recognised in good time by the customer, but the issue still resulted in repair costs of around 17,000 euros, which far exceeded the value of the bearings.

Trade associations such as the World Bearing Association (www.stopfakebearings.com), the German Anti-Counterfeiting Association (www.markenpiraterie-apm.de) or the Quality Brands Protection Committee (www.qbpc.org.cn) ensure that the public is informed about the risks caused by the use of counterfeit industrial products. These organisations also work closely with national authorities to create the required legal and organisational framework to effectively fight counterfeit products and to protect manufacturers and their customers.