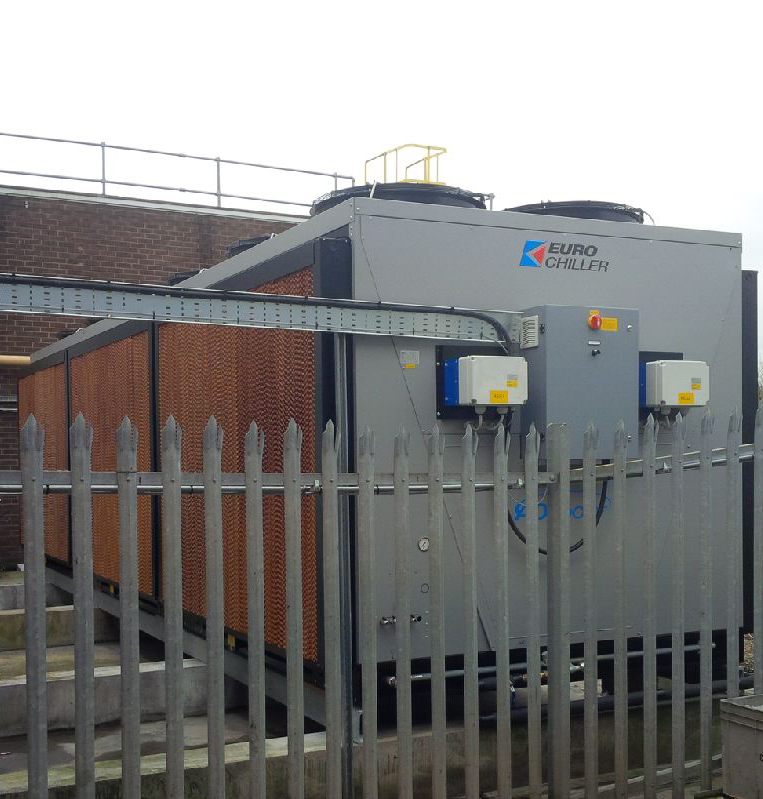 Automotive components manufacturer, Calsonic Kansei, is saving tens of thousands of pounds in cooling costs thanks to an advanced energy and water saving solution from process cooling specialist, IsoCool. The project, which involved the replacement of two ageing cooling towers with a single adiabatic ADCOOLER unit from IsoCool, is achieving financial savings in the region of £35,000 a year, in addition to hundreds of thousands of litres of water annually.

Calsonic Kansei is a global leader in the manufacture of high quality automotive components supplied to a number of the world’s leading automotive firms. Boasting 62 operations in 16 countries, the company’s success is in part due to its comprehensive corporate social responsibility programme, which ensures that each operation is committed to lean manufacturing, environmental management, the promotion of zero emission plants, and the elimination of waste through its production processes. It is this ethos that led Calsonic Kansei to review an increasingly inefficient cooling system at its Sunderland factory.

Historically, two ageing cooling towers were used to supply machine cooling to 12 injection moulding machines ranging from 220 to 2,200 tonnes, in a section of the factory which produces interior parts for several models of a large automotive brand. Although both cooling towers had served the plant well for many years, their advanced age led to rapidly deteriorating conditions, and the system was losing thousands of litres of water a day in bleed off.

As a result, Steve Norton, senior engineer at Calsonic Kansei in Sunderland, issued a tender for a cooling system that would improve the water and energy efficiency of the plant. As it was, the existing plant required an annual spend of approximately £12,000 a year on water treatment and salt (the latter supplied to a water softener), and £10,000 per annum on water make-up through evaporation and bleed off. Energy costs for the existing cooling system totalled in the region of £13,000 a year.

“Our specification was for a high quality, proven solution that would ideally consist of one piece of equipment at a suitable budget. To judge submitted tenders fairly, I use a score sheet that marks each supplier on a number of factors such as product quality, cost and service. Some suppliers simply didn’t provide enough value. IsoCool’s solution was the only one to fit the spec perfectly, ” explained Mr Norton.

IsoCool’s solution involved replacing the existing cooling towers with a closed circuit adiabatic ADCOOLER, a unit which is manufactured by world-leading cooling equipment OEM, Eurochiller, of which IsoCool is sole UK distributor. The ADCOOLER is a water saving, contamination free, and highly energy efficient alternative to cooling towers and adiabatic spray systems. It works by drawing ambient air through variable speed fans, and uses a small quantity of saturated water to remove heat from the air through the process of evaporation. No process water is consumed and water losses are negligible. In addition, limescale formation is reduced significantly and chemical treatment minimised, while, with no aerosol formation, air contamination is eliminated completely thus avoiding health and safety issues such as legionella.

In terms of performance, the ADCOOLER is able to achieve water temperatures at least 3oC below dry bulb ambient for this particular application – the closest to a cooling tower design without the inherent water treatment regime, water loss, and health and safety risks associated with evaporative towers. In addition, the ADCOOLER is designed intelligently to switch automatically between dry and wet bulb operation according to ambient temperature and humidity. In this installation, the ADCOOLER’s adiabatic circuit only operates when dry bulb ambient exceeds 20.4oC; below this temperature, the unit delivers up to 100% direct air cooling.

Before the unit was installed, IsoCool prepared a detailed running cost analysis of the existing cooling tower system compared with IsoCool’s ADCOOLER unit. As part of this, IsoCool estimated that the ADCOOLER would operate on free cooling for approximately 97% of time each year, with the adiabatic circuit running for only 220 hours out of 8,064. Electricity costs for running the new system were forecast to be almost half that of the existing system, generating a saving of more than £6,000 a year on energy. In addition, IsoCool calculated that the new solution would save just over £30,000 a year on water (by almost eliminating water make up) and water treatment. In total, IsoCool projected that the new system would generate savings of approximately £40,000 a year for Calsonic Kansei, costing little over 1/5th in running costs of the previous cooling tower system.

IsoCool’s new system was installed in August 2014 during a planned shutdown, with the whole process taking less than a week. Mr Norton remarked: “The installation was excellent. The whole thing was swift, and was carried out professionally, within the timeframe allocated.”

In line with the company’s strong environmental commitment, Calsonic Kansai has kept a close eye on the efficiency of the new system, which Mr Norton said has had a significant impact: “We saw an immediate effect on water thanks to the installed flow meter. Before, we were losing thousands of litres a day from evaporation and water loss, but that changed overnight – now water loss is barely anything at all. Of course, we no longer have to buy salt, and the new solution is saving considerable sums on water treatment costs. In addition, the free cooling element is excellent – we’re benefitting from it whenever the ambient temperature is below 20.4°C, which is most of the year round in Sunderland.”

He continued: “All in all, IsoCool’s solution has gone a long way in helping us to meet our ambitious company targets of eliminating waste in production processes and moving towards zero emission plants. This new system is extremely efficient and is a great improvement on the previous system in terms of environmental impact.

Andrew Smith, plant manager at Calsonic Kansei’s Sunderland plant, commented: “We’re delighted with the result. This is one part of many improvements as we focus on environment and energy savings.”

An ageing boring machine is restored to it’s best