The battle for globalisation

The line of functionality between SCADA and DCS is blurring. These two traditionally disparate technologies are now seen as competitors in similar application environments. Here Frank Horden of Yokogawa argues that the changing nature of globalisation means that there are still distinct benefits in using SCADA as an umbrella layer on top of a DCS core

Not many things in life remain constant and ultimately change is inevitable. The much loved cartoon show The Simpsons, seems to have flouted this rule as it enters its 25th season. The show has captivated millions for nearly a quarter of a century. 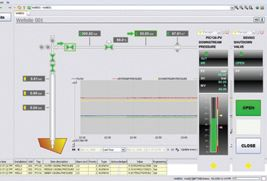 One of the key reasons for its success is the protagonist Homer Simpson. Viewers can relate to his on-screen antics and naivety. His lovable nature however, seems somewhat paradoxical to his job as a safety inspector at Springfield’s nuclear power plant.

It’s frightening to think that human beings, with our haphazard Homer tendencies, still form an integral part of such a highly regulated, automated and controlled environment.

At the heart of such environments lie platforms such as the distributed control system (DCS) which has developed over the years, from humble beginnings as a single loop controller housed in a panel. It is now cheaper and more intuitive, partly as a result of the use of PLC interfaces.

The strength of a DCS lies in a single database set-up with minimal complexity and low risk of data redundancy. Recent developments have seen a push towards better smart reporting and relaying of management information (MI) through Human Machine Interfaces (HMI).

On the other hand, the supervisory control and data acquisition system SCADA (supervisory control and data acquisition), has developed from a simple visualisation tool used in a bank of relays. It has reached a point where it can now provide an increasingly object oriented approach, storing hard I/O tags from numerous devices in its fast Historian databases.

This convergence of the two overlapping technologies has created a level of confusion in the industry. At first glance, it seems that SCADA and DCS have become direct competitors, doing essentially the same thing.

Buyers look to vendors that provide turnkey solutions with proprietary hardware that requires a minimal amount of customisation. However, vendors may often use this as a marketing tool and promote overlapping functionality in order to maximise sales.

Essentially, DCS systems are sometimes sold under the SCADA label and SCADA is sometimes branded as DCS. This does more harm than good for the industry by blurring the boundaries.

The boundaries are evident when the production environment is seen as a garden. DCS is an ‘inside the fence’ solution best suited to those continuous, PID control intensive applications. In contrast, SCADA can be seen as an ‘outside the fence’ solution, better suited to geographically dispersed environments using commercial off the shelf hardware.

The evolution of these technologies has come amidst a greater shift in globalisation. Supply chain networks are being strengthened by advancements in international trade, improved transport infrastructure and telecommunications such as fibre optic broadband.

Yokogawa has always favoured an integrated approach. The developments in globalisation have meant that new norms in control architecture are now upon us. The irony is that a theory developed in a pre-World Wide Web era is more relevant today than ever.

The ISA-95 standard breaks down control environments into levels of integration. Level zero is defined as the physical process in a plant. Level one consists of intelligent devices such as smart sensing and actuation. Level two brings in control systems DCS and SCADA for supervising, monitoring and controlling the process.

It is evident that modern developments have blurred the lines between these levels. As such, Yokogawa’s integrated approach seeks to compliment the robust control of DCS on a plant level, with SCADA as a supervisory umbrella at the hybrid enterprise level.

So what of the future? Only five years ago the forward thinking trend was for real time information and big data. The internet of things justified the idea of context-based events, from alarm notifications to smart diagnostics.

A new era of HMI is rolling-out through the use of intuitive touchscreen tablet devices. Maintenance crews can be notified via satellite ground positioning systems (GPS), of nearby alarms, allowing them to respond immediately, pulling up PDF troubleshooting and datasheets in the process.

All this data is increasingly being stored in the Cloud. Although there are still security concerns for mission critical applications, improvements in data encryption mean that this is fast becoming a viable option.

As we move towards an uncertain but exciting future, one thing remains certain – change is constant. Human beings are still very much part of the process and will remain so for the foreseeable future. We can only hope that we have as lasting an impact as Homer Simpson!