The march of Thatcher’s robots 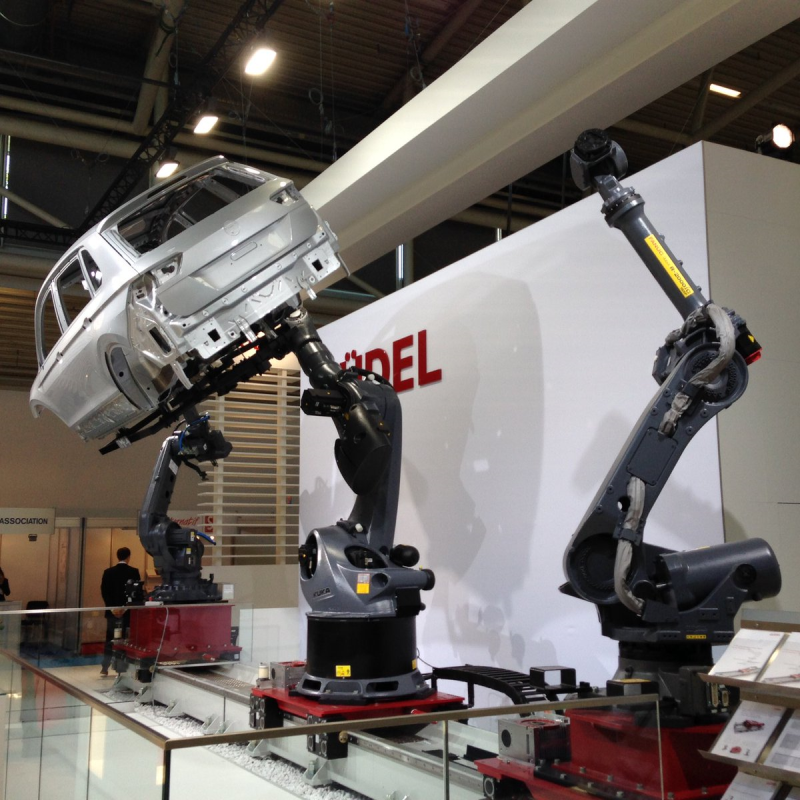 As part of UK Robotics Week, Richard Stone of industrial automation specialist PR company, Stone Junction, discusses the advances being made in robots while reviewing this year’s AUTOMATICA trade fair, one of the largest exhibitions of its kind in the world.

About 15 years ago I wrote an article for an automation magazine about the progress made in industrial robotics since Margaret Thatcher opened the British Robot Association conference in 1981. In her opening remarks, she commented: “So we have robots which will put their hands into a furnace. Robots that will check a lorry for an unexploded bomb. Robots that will clean skyscraper windows and explore the sea floor.”

However, not a great deal had changed by 2001. There were better actuators and servomotors, better encoders and much better vision systems, but there hadn’t been a sea change in the functions robots perform in industry.

I held that view for some time, despite the very clear advances in service robotics that I witnessed at AUTOMATICA, perhaps the world’s leading robotics show, in 2008 and 2010.

Last week my position changed when I visited this year’s AUTOMATICA show and saw for myself the advances that nearly every company in the industry has made in collaborative robotics and autonomous factory vehicles.

For me the role of robots in industry, not service robotics, is the crux of the issue. A hideously expensive robot making and delivering coffee in the Nescafe headquarters is one thing, but service robotics will not make a big difference to our economy for some time. Industrial robotics will.

The first thing that greeted me when I arrived at AUTOMATICA was a robot that looked a lot like an R2 unit from Star Wars, carrying a package from one stand to another. We nearly walked into each other. Marketing trick? Certainly. But the marketing trick saw me before I saw it and stopped before we actually collided.

“Humans and machines will work even more swiftly and simply with one another in the future,” explained Esben Østergaard, the CTO and co-founder of Universal Robots. “As we see it, in the future it will be more than just the products themselves that offer our customers the necessary flexibility.”

I think it is fair to say that Universal Robots, as well as plenty of other businesses, demonstrated exactly that at AUTOMATICA.

I was lucky enough to see collaborative robots from the likes of Kawasaki, ABB, Fanuc and Staubli during the event. One Kawasaki robot was showing off its impressive payload by repeatedly lifting a dune buggy.

While on the Güdel stand, I saw a trio of robots from various manufacturers, mounted together on one of Güdel’s own gantry systems, demonstrating their two-ton payloads by lifting a car.

In the SME zone I came across a business called the Shadow Robot Company that manufactures state of the art robotic hands. The thing that shocked me was that these hands are actually used in industry; previous trips to AUTOMATICA had taught me to expect to find lots of University funded projects with no application. In contrast, Shadow has sold dozens of hands into everything from quality assurance to laboratory testing.

The United Kingdom’s Iron Lady concluded her introduction to the British Robot Association conference by saying, “technological progress is as inevitable as the march of time. We must march with it”.

Until recently, I thought that progress was limited and that, much as I love robotics and automation PR generally, the advancements had been incremental. It is clear to me now that there has been a sea change since my last visit to AUTOMATICA and I am excited to see how this manifests in the marketing of industrial robots over the next two years, before the 2018 edition of the show.